As simple as it is delicious, this Vegan Scallop Cream Sauce Pasta is one of those dishes that will quickly become your favourite. Buttery, luscious cream sauce tossed over spaghetti with seared vegan king oyster mushroom “scallops”. This recipe is perfect when you want to impress guests or make a “fancy” dinner for at-home date night. BUT it is also perfect for any night of the week! Why? because you can make it in about as long as it takes to boil spaghetti! I know right! Its easy enough for busy week nights but delicious enough to spoil yourself with just because. Seriously, this dish and a glass of wine is perfection!

I recently made a similar-ish recipe; garlic butter corn pasta with basil, which is literally what end-of-summer dreams are made of. Its comforting, buttery and bursting with fresh corn in each bite. But, when the fresh corn season winds down, I find myself still craving that pasta! And this one is slightly more indulgent with the addition of vegan cream. I use the Earth’s Own Oat Cream for Cooking (they also have an oat cream for coffee) and it is amaaaazing! 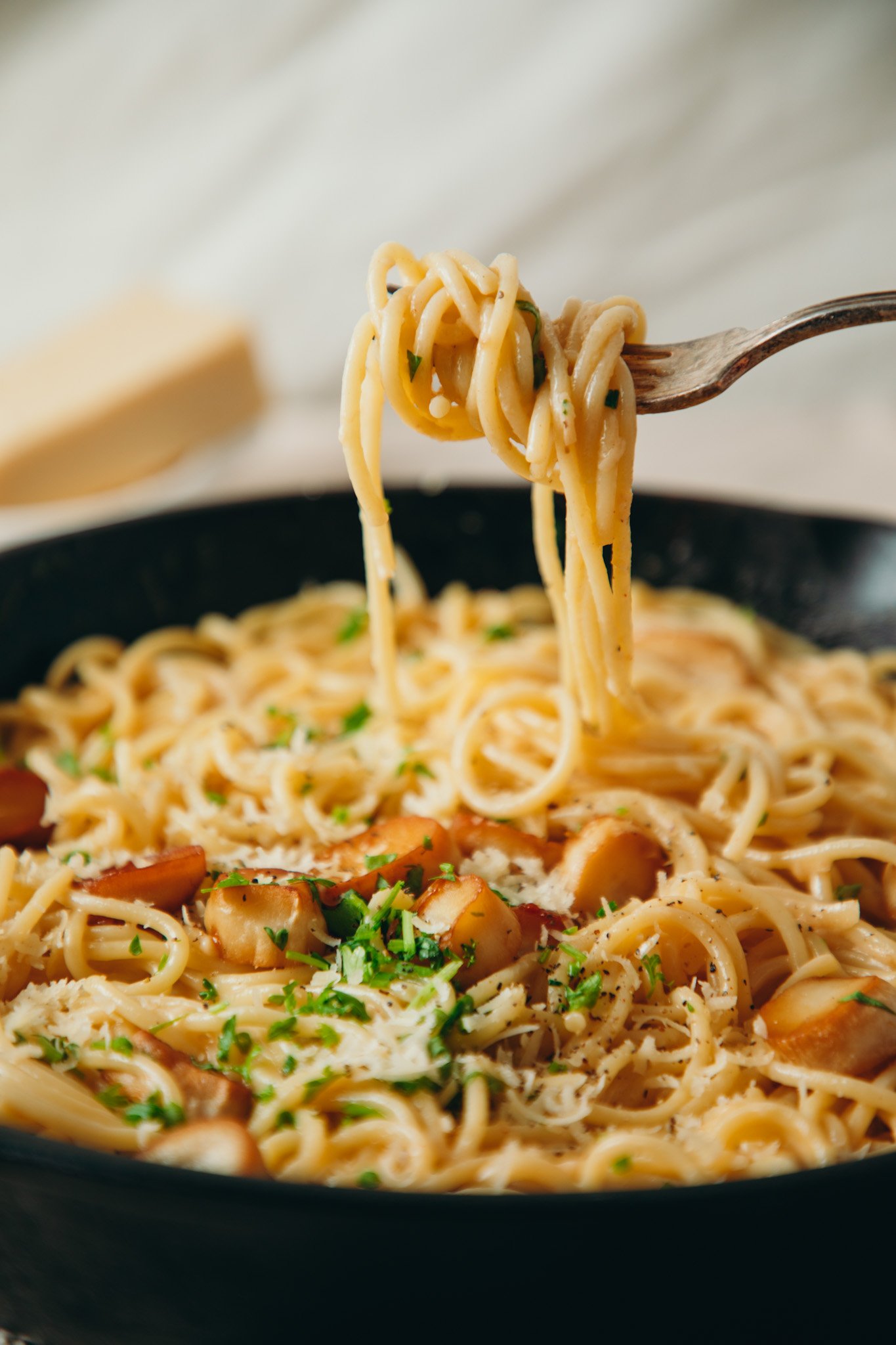 Now, don’t get me wrong. I’m not saying these taste mushrooms like exactly like scallops. I actually have no idea what scallops taste like! I think I was meant to be vegan honestly… I’ve tried one type of shellfish ONCE in my life (lobster, hated it) and that’s it. It always grossed me out too much! Living in Nova Scotia, one of the most seafood-heavy provinces in Canada, its kind of weird that I had such an aversion to most seafood, even from a young age. Pair that with my mom’s shellfish allergy and… yeah I’ve never had a real scallop. So, I can’t vouch for these mushrooms in that regard. However, they LOOK look and (from what I gather) have a similar texture to scallops. So, we’re going to roll with it. Embrace the mushrooms people! They’re yummy in their own way!

It honestly couldn’t be easier! Just grab a frying pan and heat it to medium-high heat. Add oil or vegan butter. When sizzling, add mushroom rounds and sear about 5 minutes per side (adding a little extra oil if necessary, as mushrooms can soak it up initially) until golden brown.

That’s literally it. Then, set aside while you make the sauce. It all comes together so fast, and the pasta is boiling away while you do all of this. Then, drain the pasta, add to the sauce and top with the scallops. Now you’re ready to serve! I added some fresh parsley and Violife parmesan wedge (my first time trying it, soooo yummy) and you’re done! 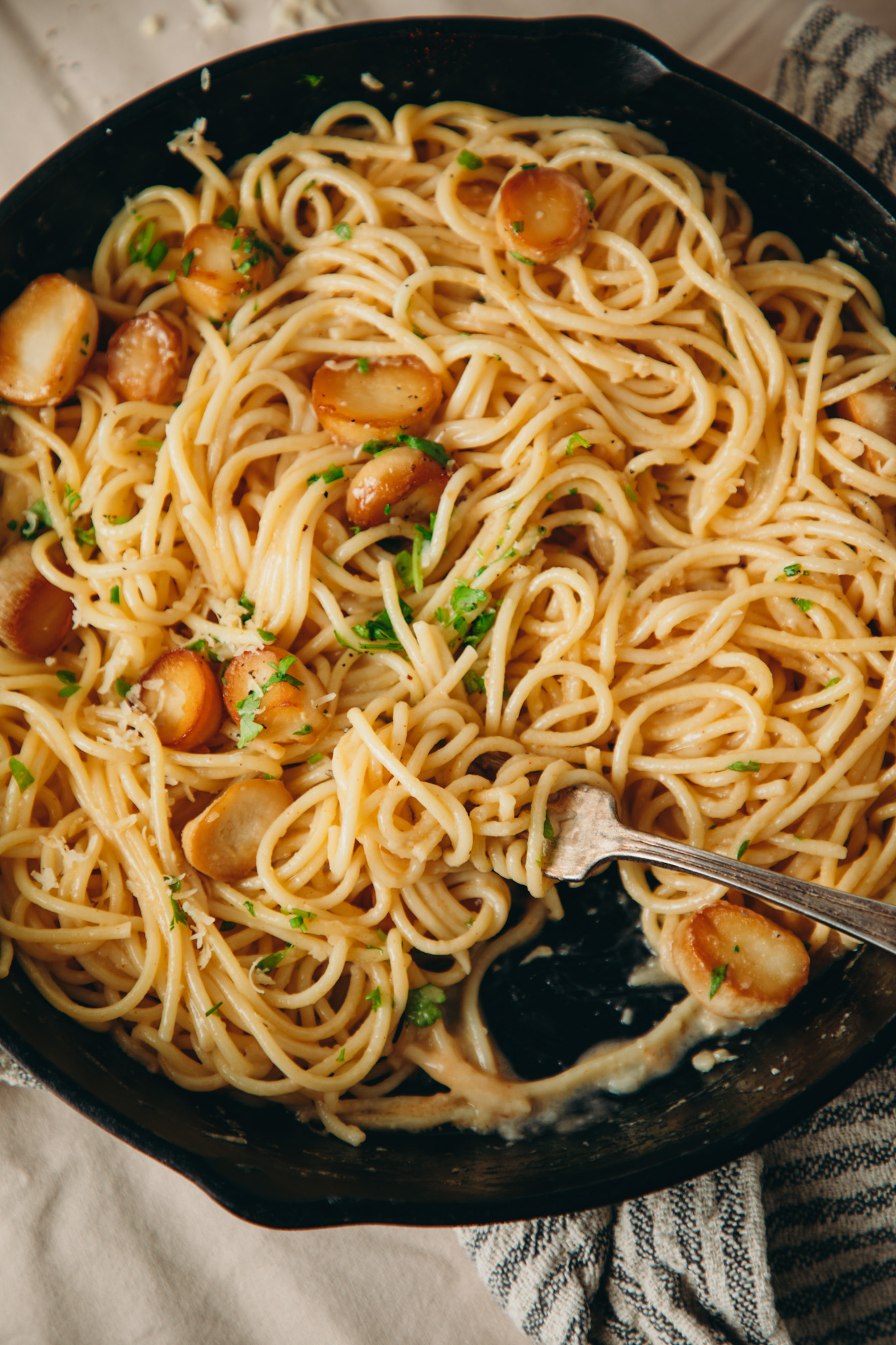 If you’re looking for more vegan scallop recipes, try these ones:

Or, if you want a different ~fancy~ vegan pasta, try these!

If you make this recipe or any others, make sure to take a photo and tag me on Instagram! Also, if you’re looking for video tutorials for hundreds of plant-based and vegan recipes make sure to subscribe to my YouTube channel.

This weekend is my bachelorette weekend! My sister Bridget and soon to be sister-in-law Madison are planning it and I have no idea what we’re doing! They told me I need something fancy for Friday night and activewear for Saturday morning. Any guesses? Eeee I’m so excited! 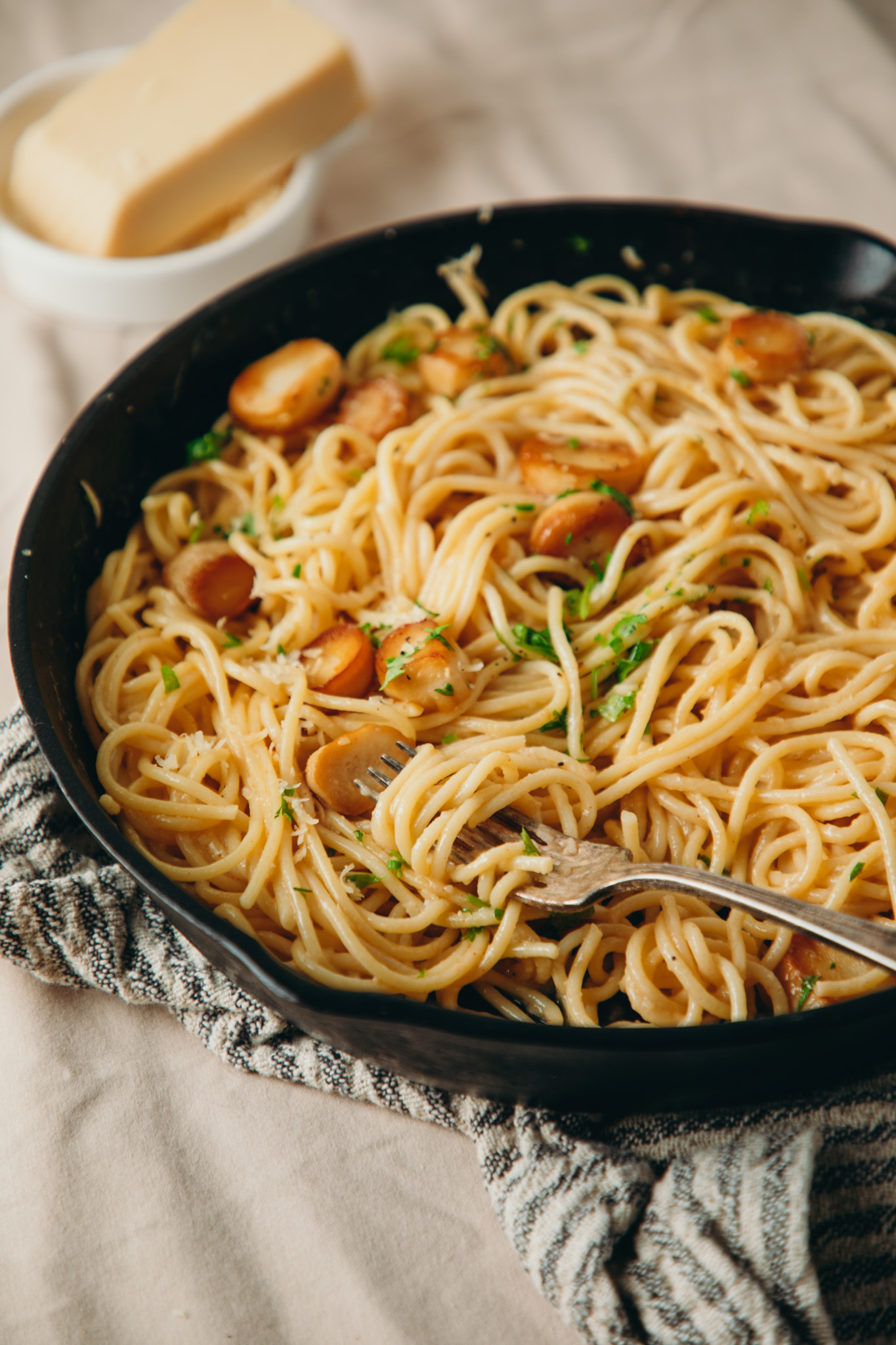 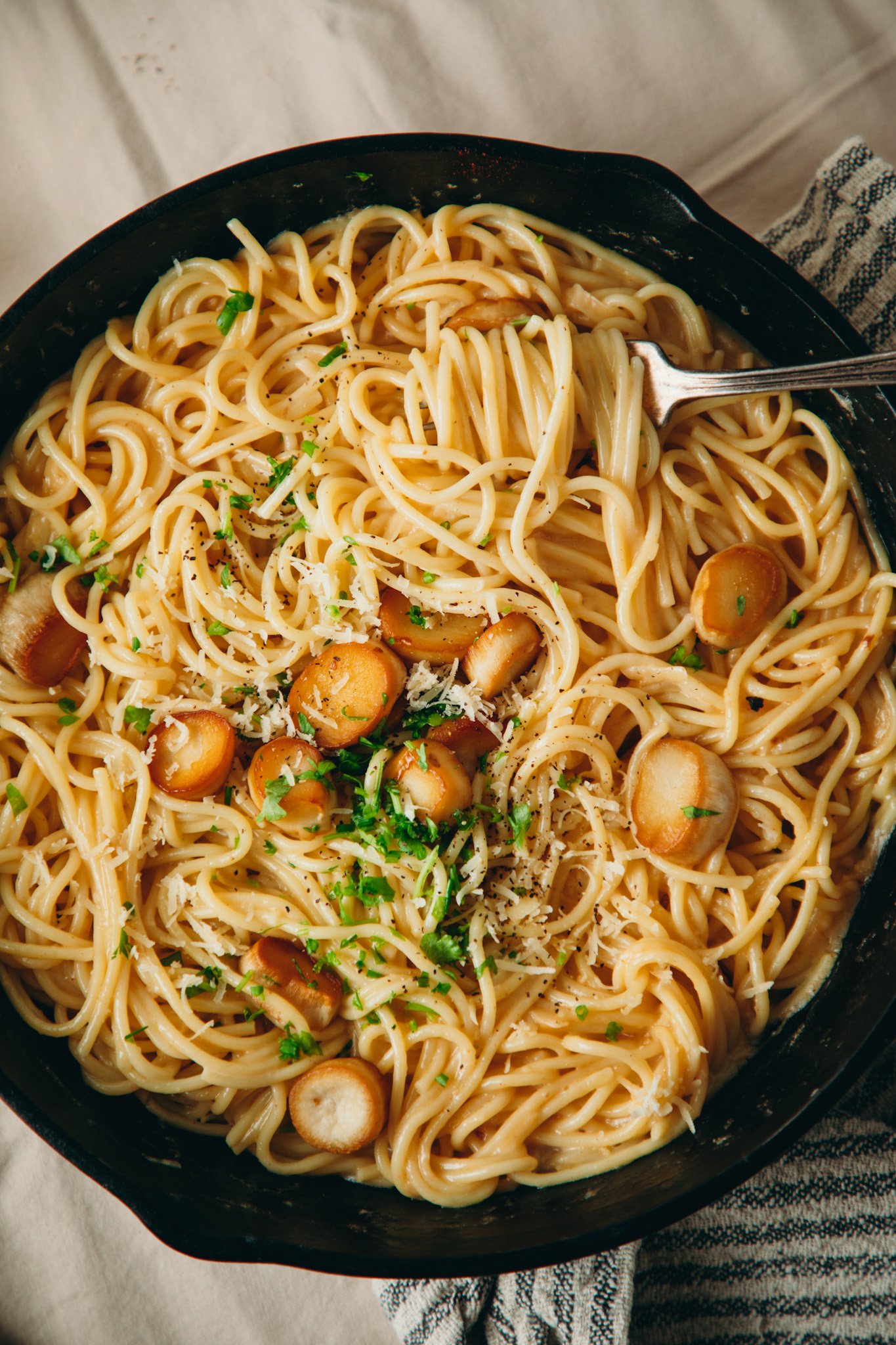