This post is in collaboration with Holly from The Little Blog of Vegan! We decided to partner together to create two cinnamon-themed recipes to kick-start your autumn, and both turned out so amazingly delicious! Keep reading to see Holly’s Autumn Swiss Roll Cake, or click here to go to her recipe post right away!

Adding to my collection of coffee shop-worthy drinks you can make in your own kitchen, this is a Cinnamon Roll Latte with Mini Cinnamon Rolls and a Coffee Glaze! A sweet and warming vanilla cinnamon syrup, espresso and frothed milk, topped with the optional (but not really optional) coconut whipped cream, and mini vegan cinnamon rolls with coffee glaze. All of this recipe is 100% vegan and actually incredibly simple to make right at home. 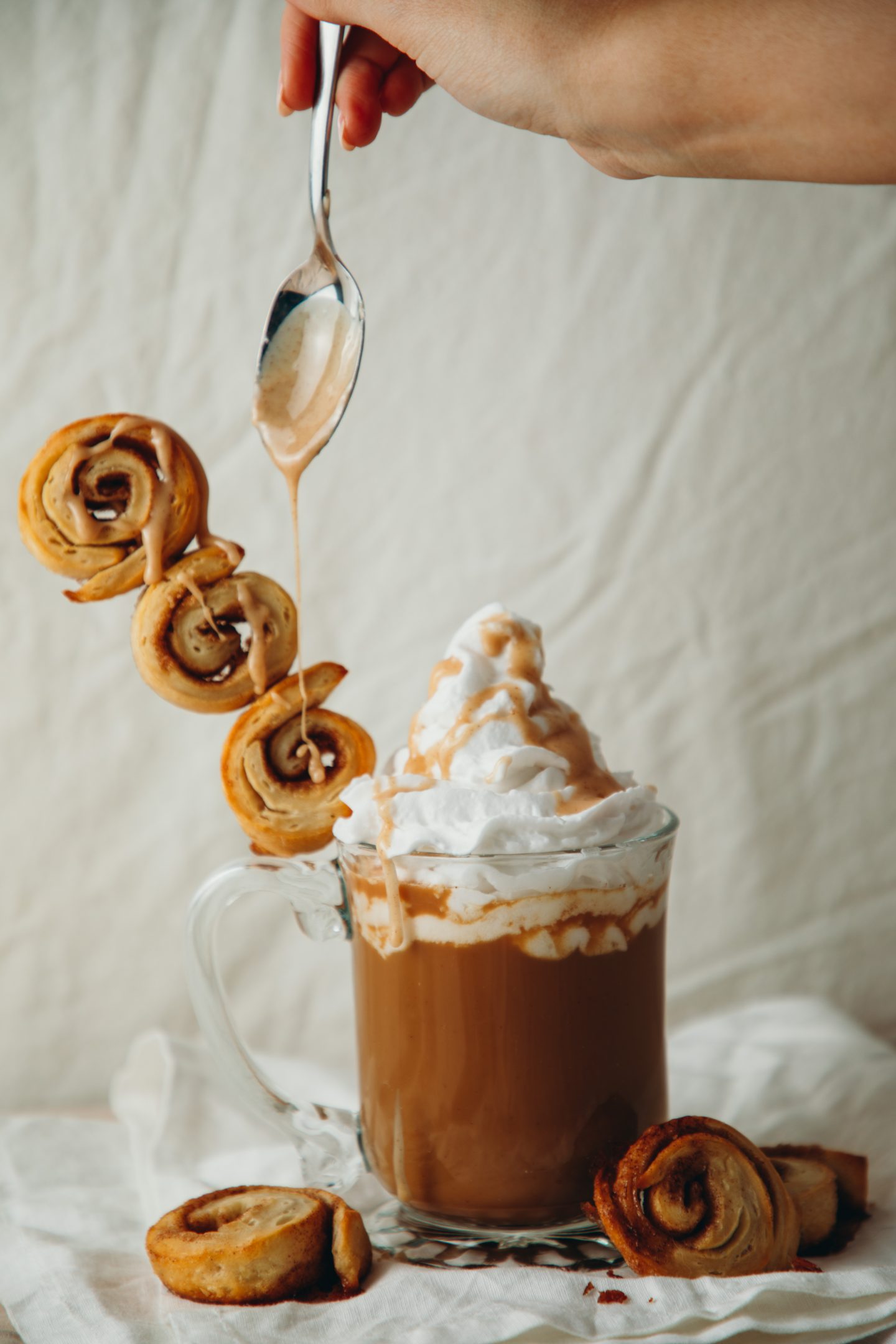 I cannot wait for you all to try out this decadent, cinnamon roll-inspired coffee creation; its my newest obsession! This recipe has a few components:

The Cinnamon Collaboration with Holly @TheLittleBlogofVegan

Before we get into this recipe, we have to discuss Holly’s creation for a minute. First of all, Holly is truly a gem in the vegan community. Her page and blog are filled with the most decadent, wonderful sweets and every recipe will have you wondering “HOW does she do it?” she truly is like a magical wizard in the kitchen! With so many people giving up dairy or eggs, but also missing baked goods, Holly’s blog is essential reading for all of you who want to enjoy sweets without the animal products.
The Little Blog of Vegan is a multi-award winning vegan food and lifestyle blog. Holly has won Food Blogger of the Year 2017, Top 10 must follow blogger 2018, she’s been featured in Hello! Magazine and multiple other recipe magazines.
Her Autumn Swiss roll is a warming, spiced sponge, filled with a mouth-watering cream cheese frosting, decorated with crunchy walnuts. Just looking at these photos makes my mouth water! 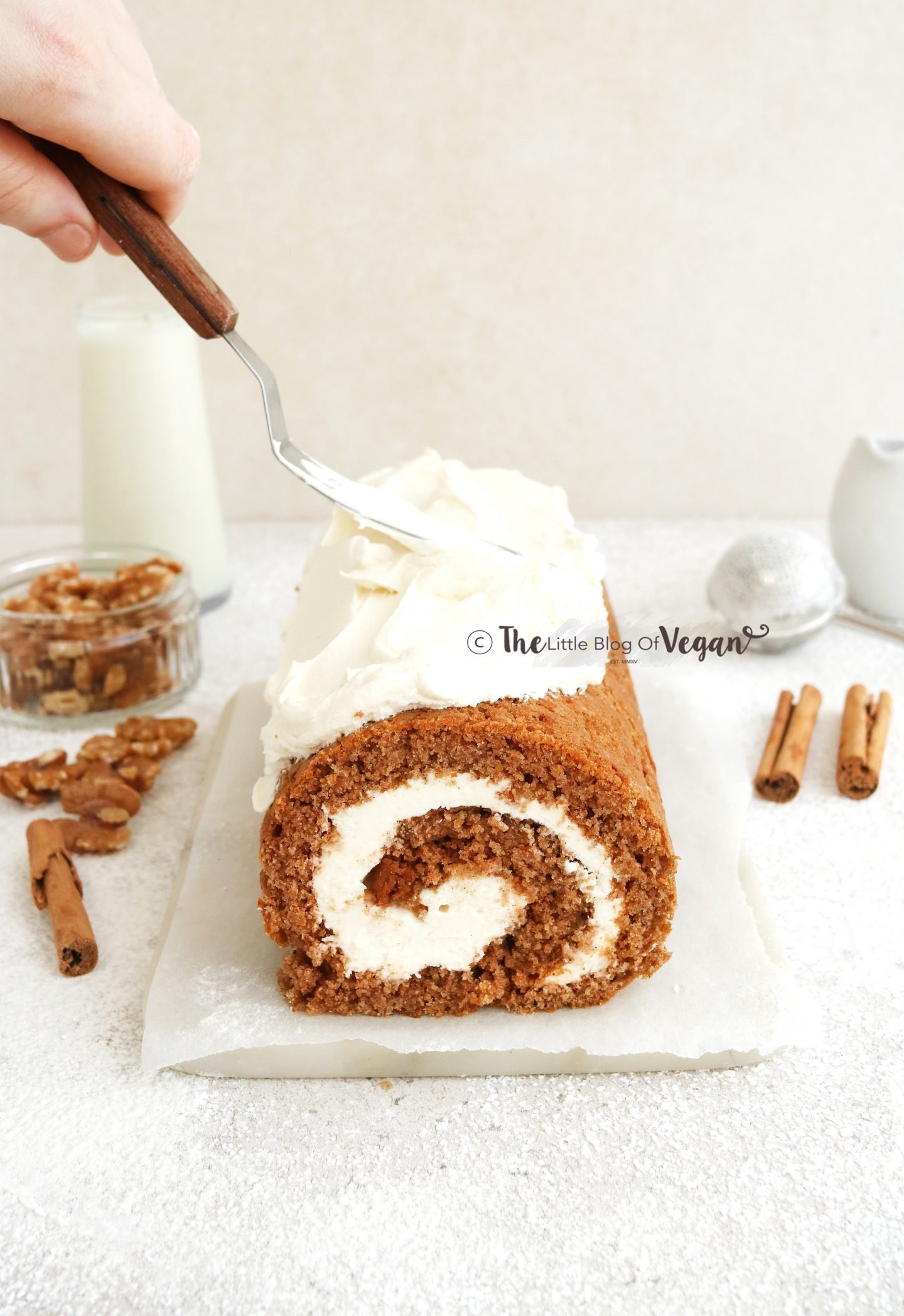 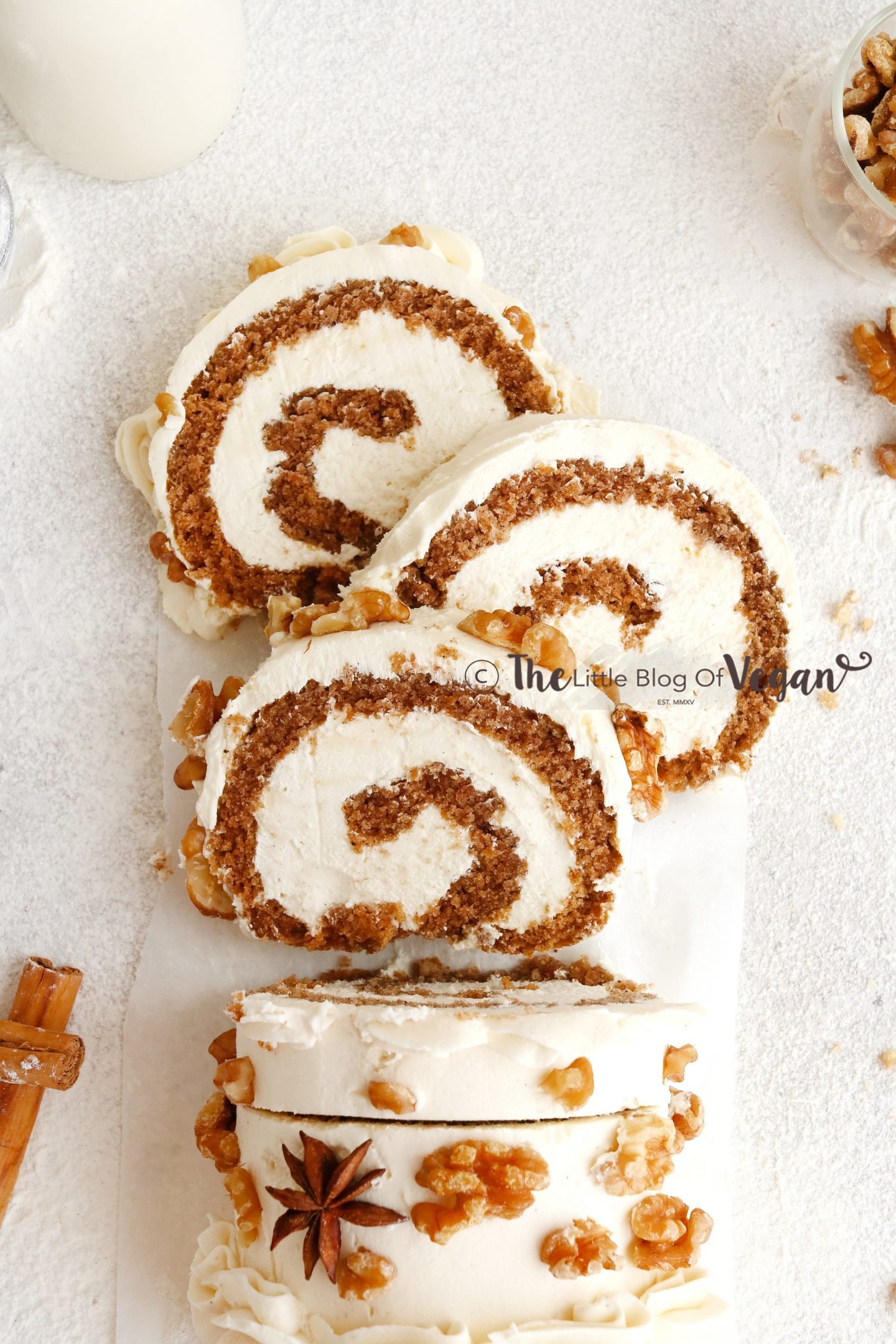 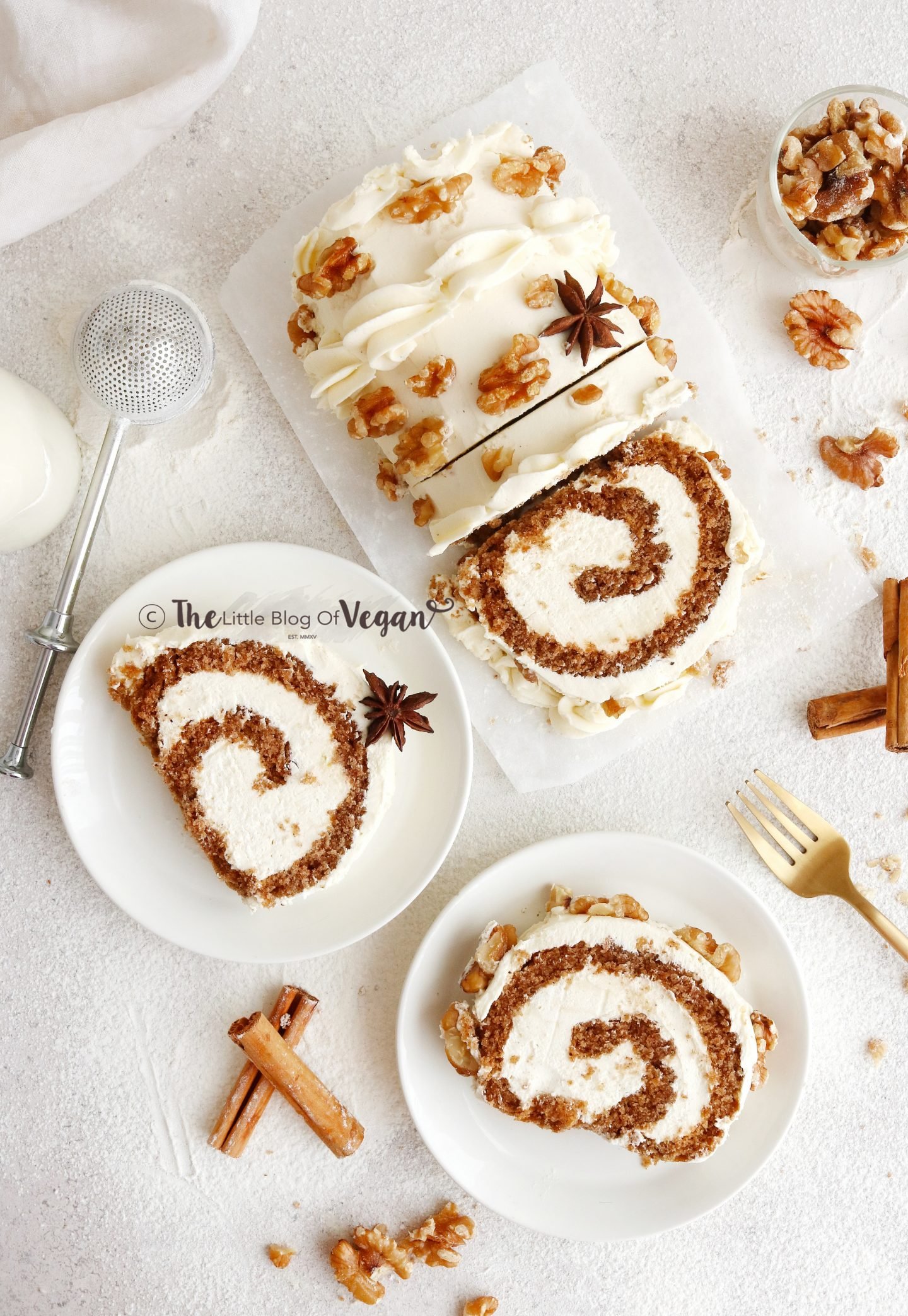 I can’t think of a better pairing than these two recipes for these mid-September days that are just cool enough to make you crazy all the warming fall sweets. I am so excited that I got to collaborate with Holly, and definitely let us know if you re-create these delicious treats!

Cinnamon rolls truly take me back to my childhood. Besides the fact that my dad was always picking up freshly baked cinnamon rolls from bakeries and bringing them home to surprise us, we also made cinnamon rolls ourselves a lot with my Grandma! She has this “jiffy cinnamon roll” recipe that doesn’t require yeast, and they’re sort of a cross between a flaky biscuit and a gooey cinnamon roll. I’ve shared the recipe a bunch and also put it in my first cookbook because its not only delicious, but super super easy and not too time consuming! Most traditional cinnamon roll recipes take a while due to the yeast and dough having to rise a few times, but these ones are made and done in about 30 minutes, making them the perfect option for this latte! You can whip up a half batch of the cinnamon rolls (make them mini! It’s so much fun!) and while they bake you have just enough time to simmer the syrup for this latte and whisk together the coffee glaze.

The cinnamon vanilla syrup is reminiscent of the inside of a cinnamon roll: warm, gooey and packed with sweet cinnamon flavour. But its shockingly easy to make! The base is just a simple syrup (so water and sugar, simmered until the sugar is dissolved) and then we add some vanilla extract and ground cinnamon. Seriously- your kitchen will smell like autumn heaven!

The coffee glaze is something I came up with literally last minute because, well, you can’t have cinnamon rolls without icing! Its just powdered sugar and some coffee! I actually just took a few spoonfuls of coffee from the latte I had just made and used that. Stir it together with the powdered sugar and you’ve got yourself the perfect coffee-infused glaze for the cinnamon rolls and to top off the latte. 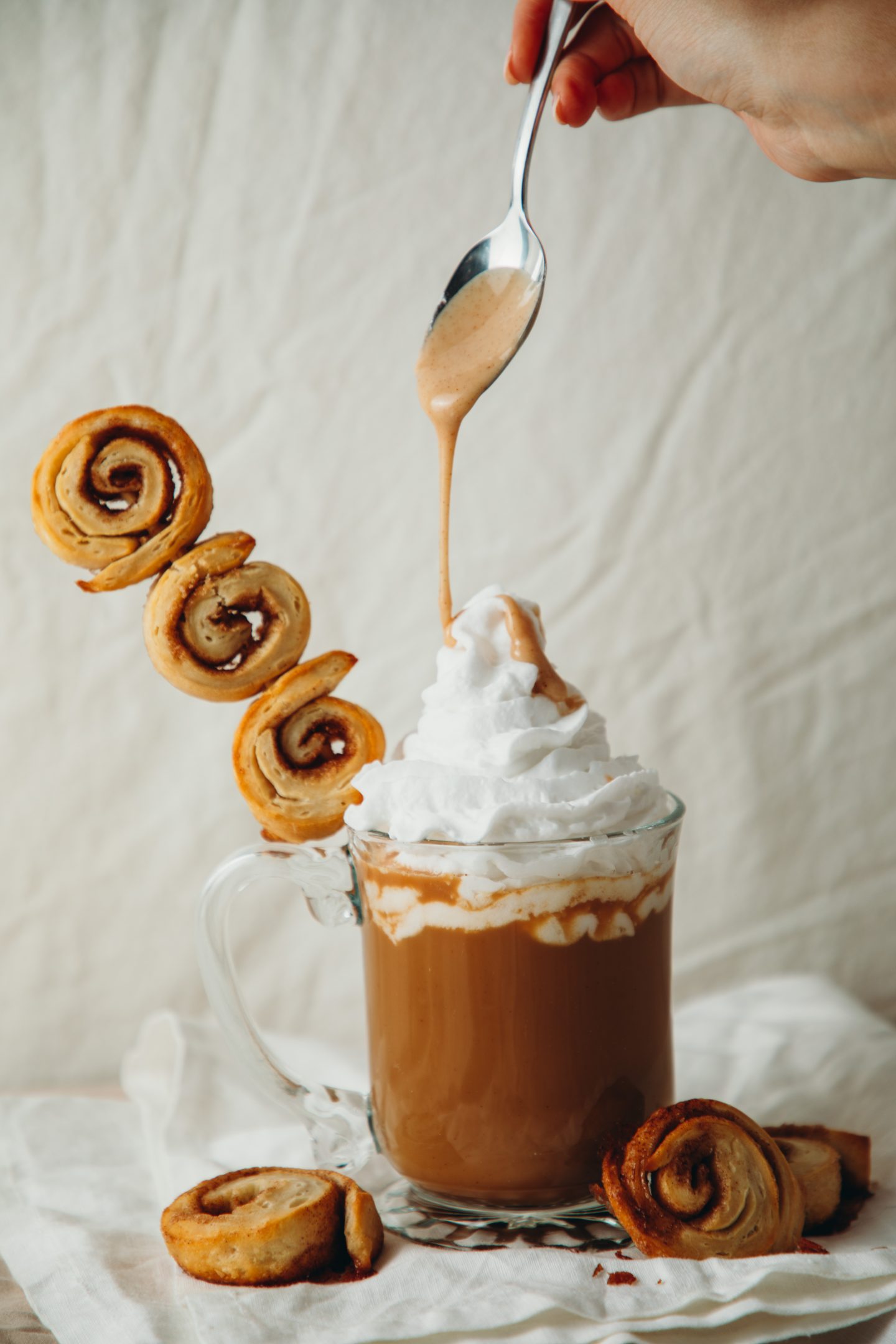 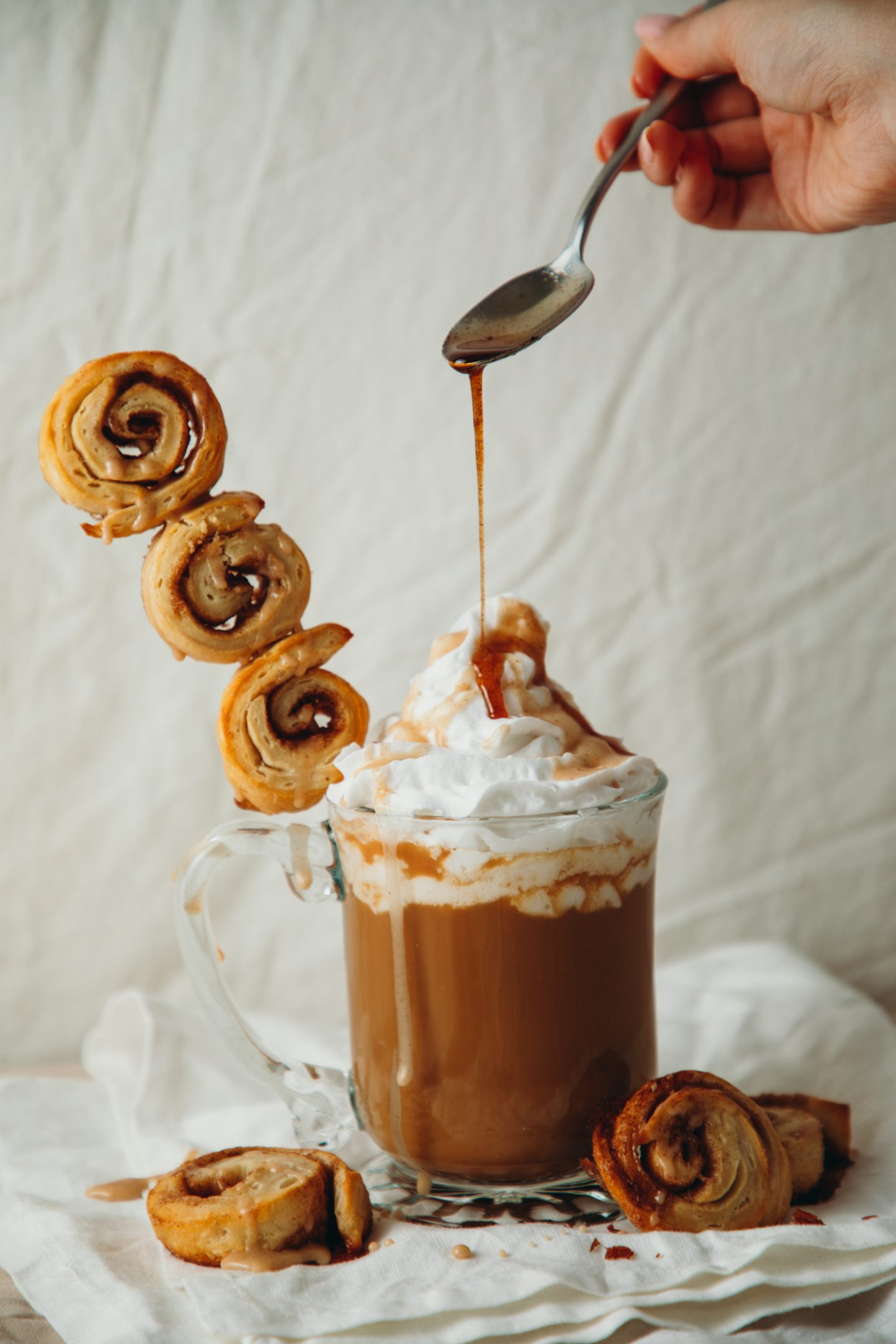 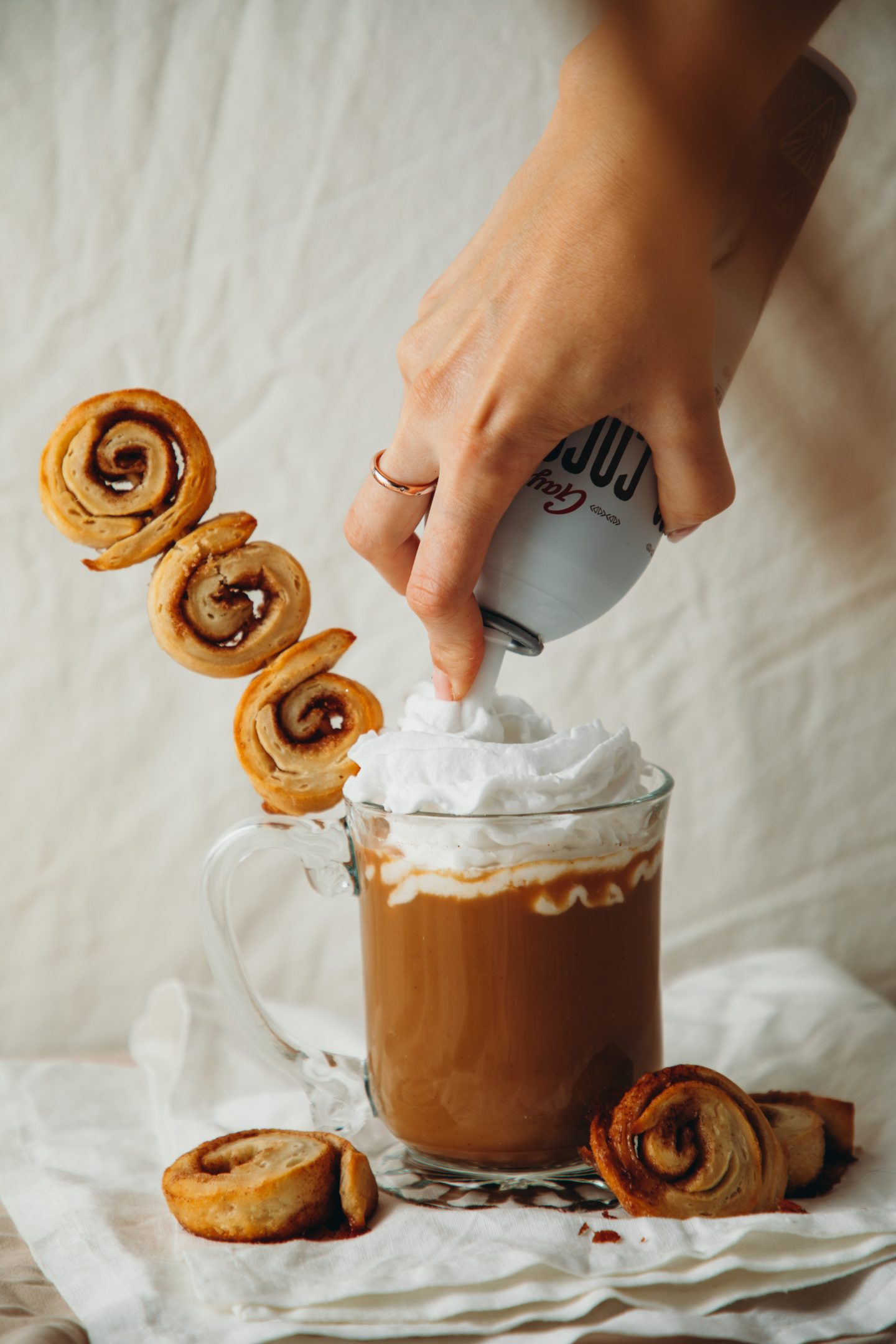 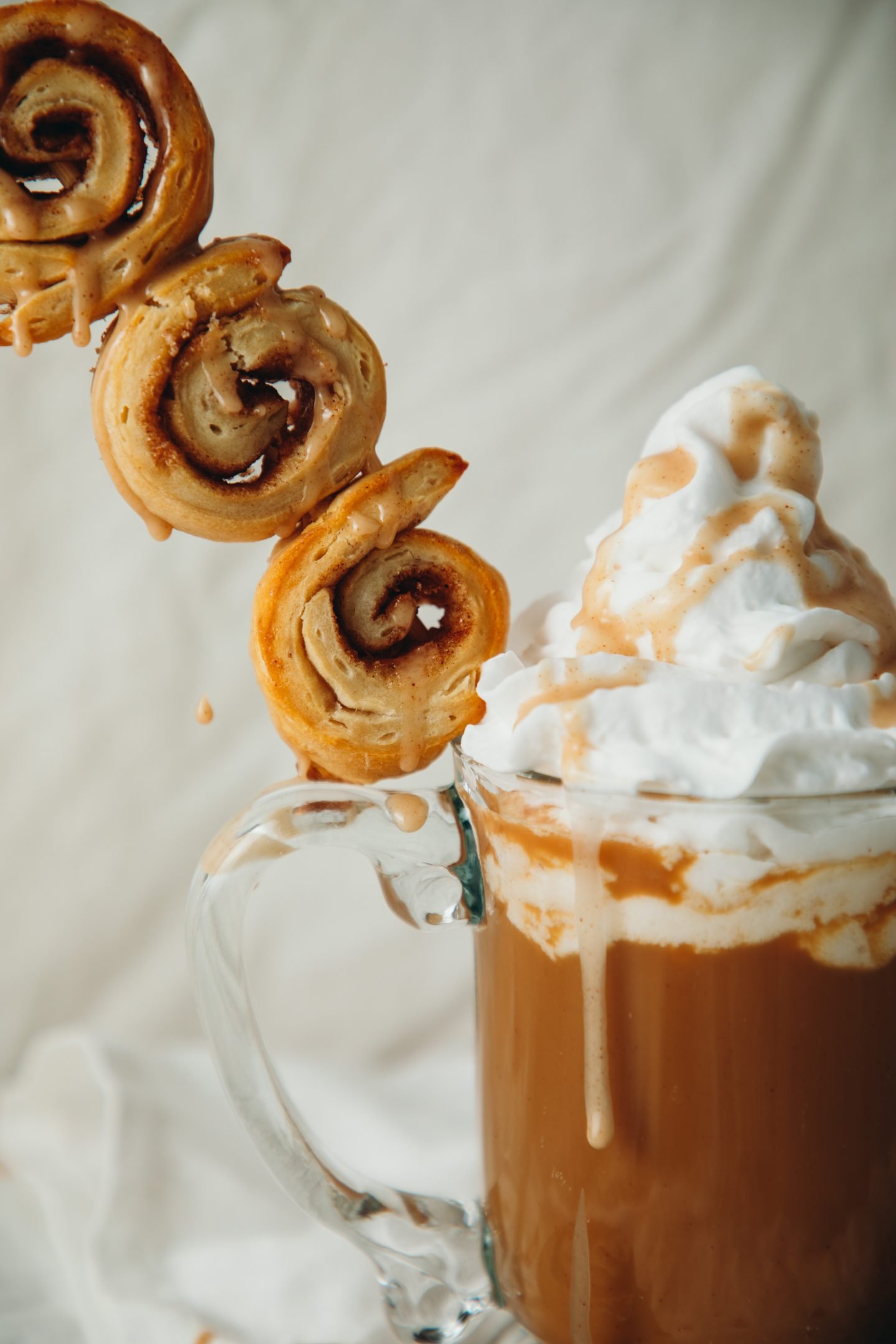