These vegan completely plant-based Chick-Fil-A Nuggets  are crunchy on the outside, soft on the inside, and dunked in a veganized Chick-Fil-A Sauce! These dairy free, vegan-friendly options for sauce is perfect for dunking waffle fries, wraps, tofu, hash browns or seitan nuggets like these.

Here’s what makes this chick-fil-a recipe SO good:

If you’re trying to eat more plant based like me, and  miss the option of fast food restaurants; try replacing a vegan-friendly dressing or vegan honey mustard sauce with this chick-fil-a sauce on your nuggets! I simply refuse to sacrifice convenience, and even more importantly TASTE, when it comes to a more plant-based home cooking lifestyle! Sometimes, we just need the option to get that greasy food fix, without the hassle! Which is why, I present to you, the quickest and easiest way to get one of the all-time fast food favourites Vegan Chick-Fil-A Nuggets and sauce!

Is chick-fil-a sauce easy to make?

When I say this is easy, I mean it! You can get this done and plated faster than the time it takes you to get to your nearest fast food joint and back! Easy to find ingredients that are either on hand or readily available make this chick-fil-a sauce easy to make. 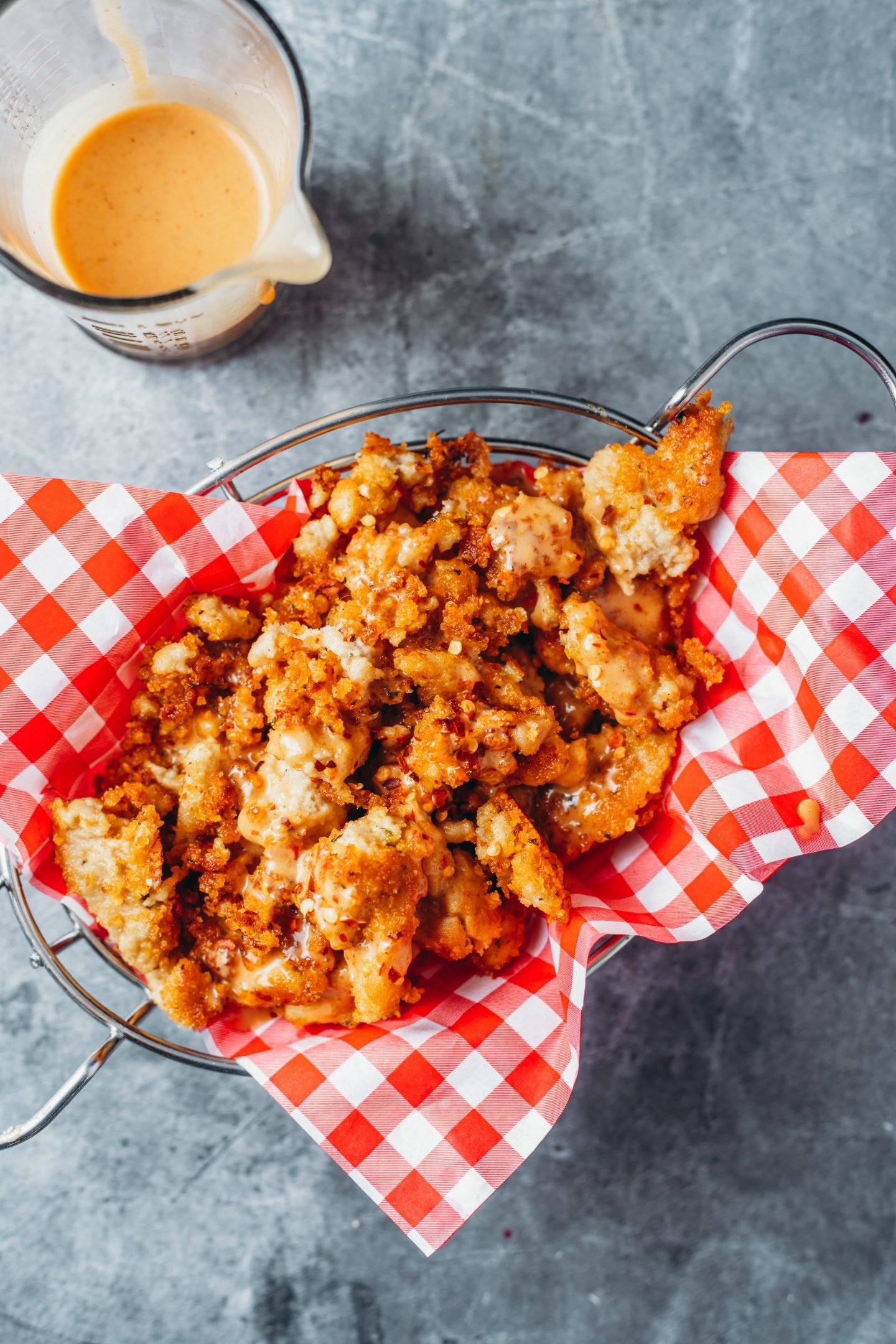 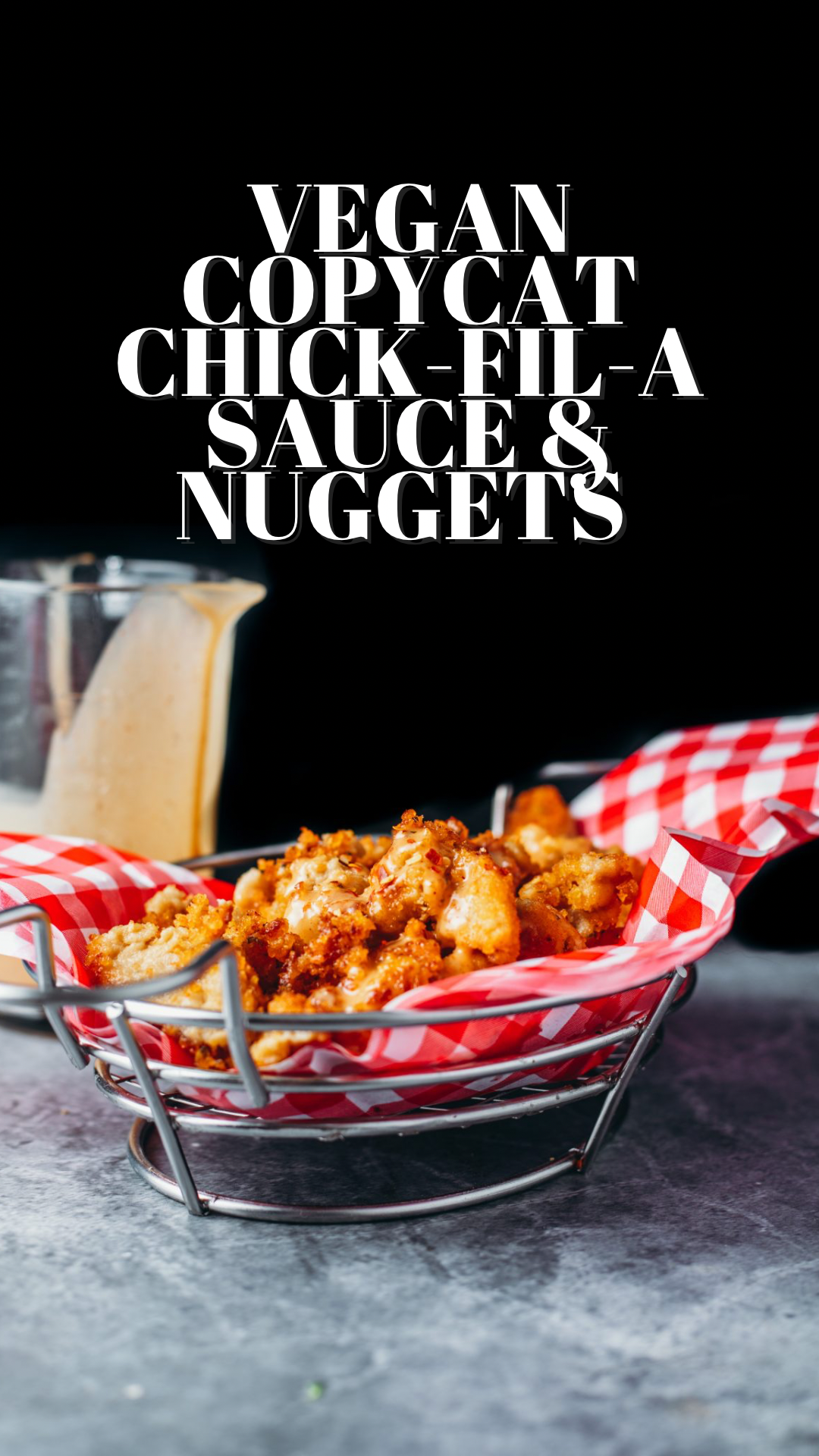 If you love leftovers, this  recipe is going to be your new go-to!

I don’t know about you, but I believe chick’n nuggets are one of the most versatile foods out there. At least when we’re thinking in the realm of fast food! These Vegan Chick-Fil-A Nuggets have been used in 3 completely different meals since I made them! Whether you just want to enjoy them as their intended use suggests – by dunking them in once of the best sauces ever created, or by sticking them in a burger bun for a Vegan Chick-Fil-A sandwich! You can also layer them on a fresh slice of sourdough with some cheese and lettuce for an open faced sandwich, and even as far as toppings on your plant-based rice bowl for dinner ( I highly recommend this option!)

You can even oven bake or air fry them to save on some of the oil if that’s your interest! Serve these up with some oven baked french fries and a side of veggies for a kid-friendly weeknight dinner the whole family will love.

This sauce will last in an air-tight container in the fridge for up to 5 day, and the nuggets can be frozen in the freezer for up to3 months. 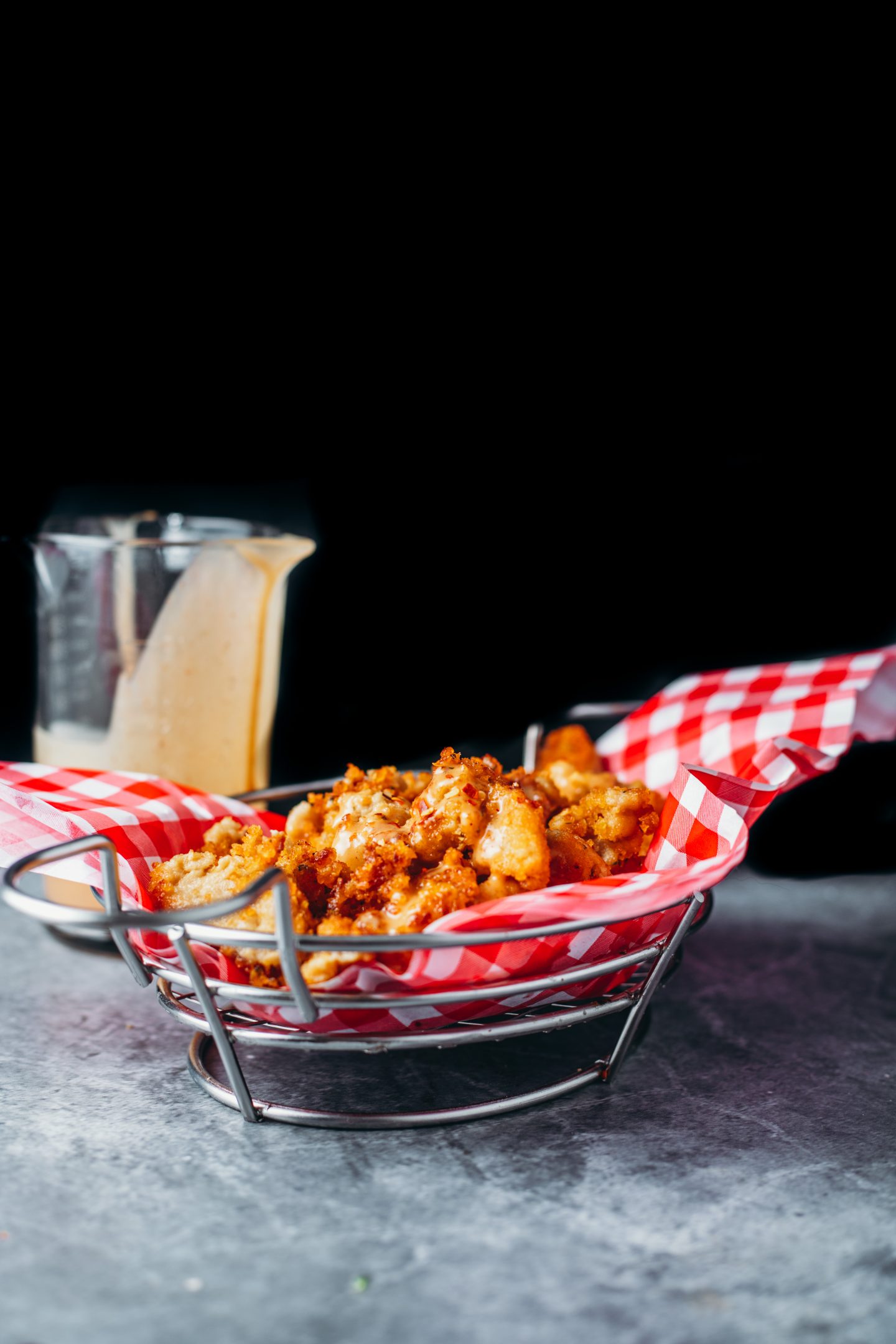 What makes chick-fil-a sauce so good?

If you grew up on chicken fingers, french fries, ice cream etc, you’ll want to save this blog to your favourites because this won’t be the last for these vegan fast food level ups! There’s something nostalgic about those foods right? Despite their obvious lack of nutrients, I find comfort in going back to them every so often for a treat and a trip down memory lane! There’s nothing fancy about them, but I’m glad to have the option!

Does chick-fil-a sauce have dairy in it?

YES! Normal chick-fil-a sauces and menu items use non-vegan products. Make this for the perfect dairy-free substitute. Welcome to an even better version of chick-fil-a.

I’m the type of guy who needs A LOT of sauce. Everything I eat, can be enjoyed 10x more with a lot of sauce! These Vegan Chick-Fil-A Nuggets are no exception! 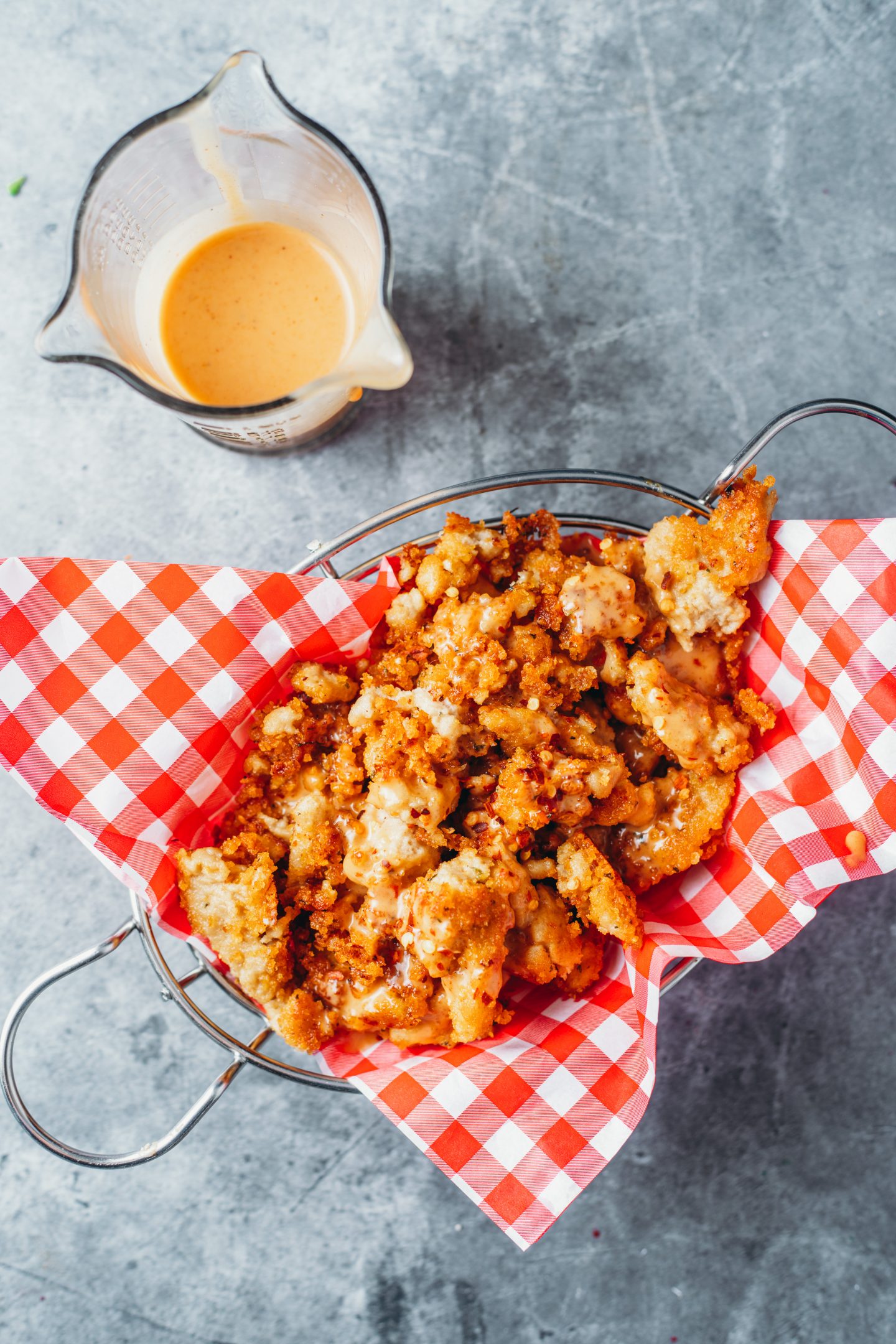 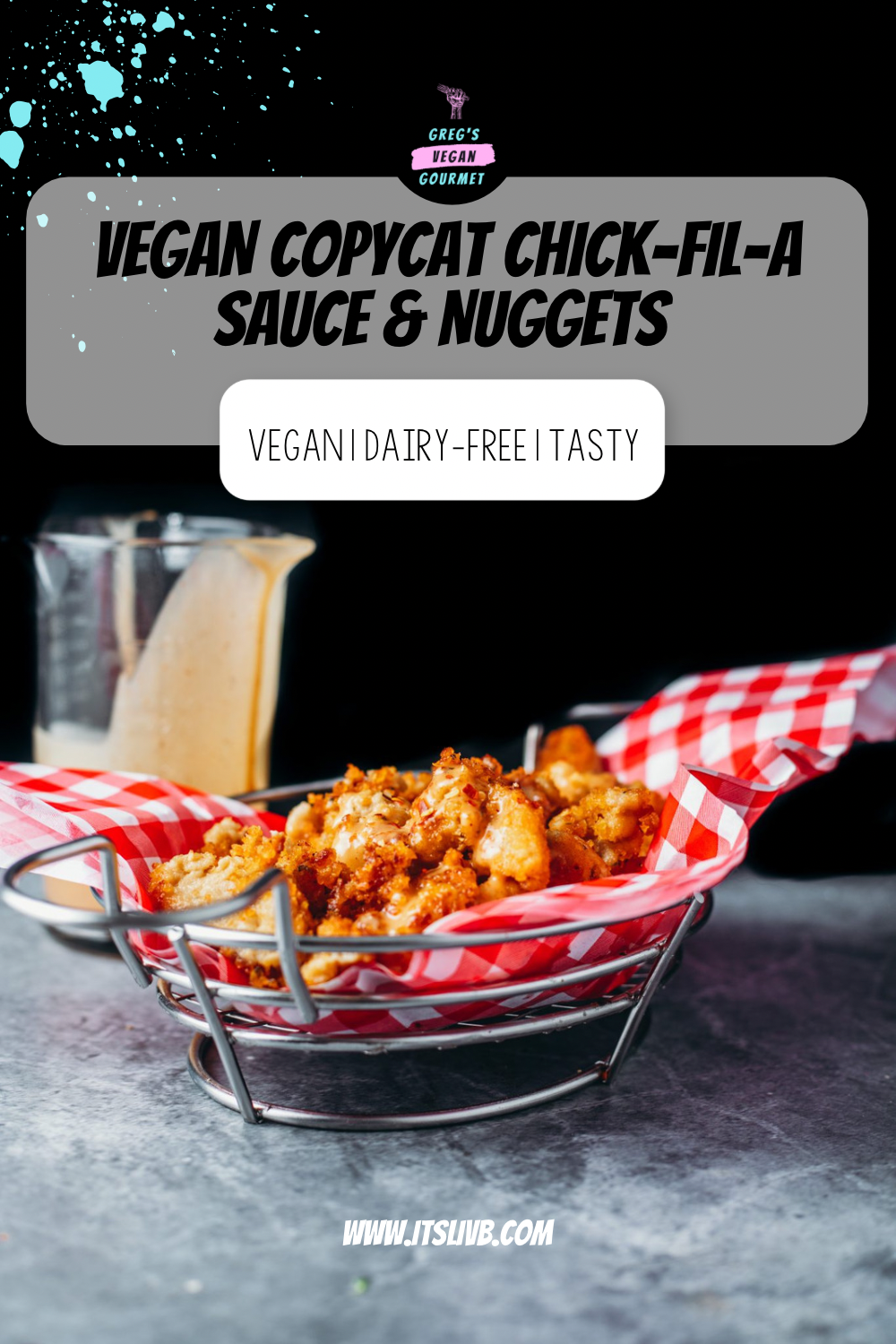 How do you make Chick-Fil-A sauce and nuggets Vegan?

These nuggets start by mixing up a batch of Liv’s Famous Seitan Chicken Nuggets! If you haven’t tried them before, you’re in for a treat! It’s about as simple as can be. They start with a simple mix of vital wheat gluten (usually found at your nearest bulk or health food store, or amazon), and vegan chick’n broth! Cook them either on the stove or in the instant pot, tear them up into small cutlets, and you’re already half way there!

All that’s left to do is toss the nuggets in a simple mix of panko bread crumbs, flour and paprika. Fry them up until golden brown, then you get to jump right into the sauce! This is the easiest part of all believe it or not. This Vegan Chick-Fil-A Sauce consists of 5 simple store-bought ingredients. whisk together the vegan mayo, barbecue sauce, pickle brine, yellow mustard or dijon mustard, and maple syrup! THAT’S IT! That is how you make Chick-Fil-A sauce vegan. Now, sit back, and let your plant-based fast food dreams come true.

It’s sort of a spin on a mayo honey mustard with the sweet flavor of tangy bbq sauce.

What sauces from chick-fil-a are vegan?

There are very few vegan options at chick-fil-a aside from their market salad, chili lime vinaigrette, avocado lime dressing and waffle potato fries. It’s a good thing I’ve got you covered for the perfect chick-fil-a vegan option!

YES! unless you consider frying in the same oil and non-vegan products to be non-vegan. But there are no animal products in most fast food chain fries.

Do the chick-fil-a nuggets contain gluten?