Quick, easy and oh so delicious! This Vegan Inside-Out Bagel Bread Breakfast Sandwich is loaded with  vegan ham, red onion and dairy-free cheese! What’s even better, the plant-based egg is on the outside! This sandwich is made using my wife’s famous Everything Bagel Bread Recipe – you’re going to want to leave the pan heated because you’ll be going to go back for seconds! 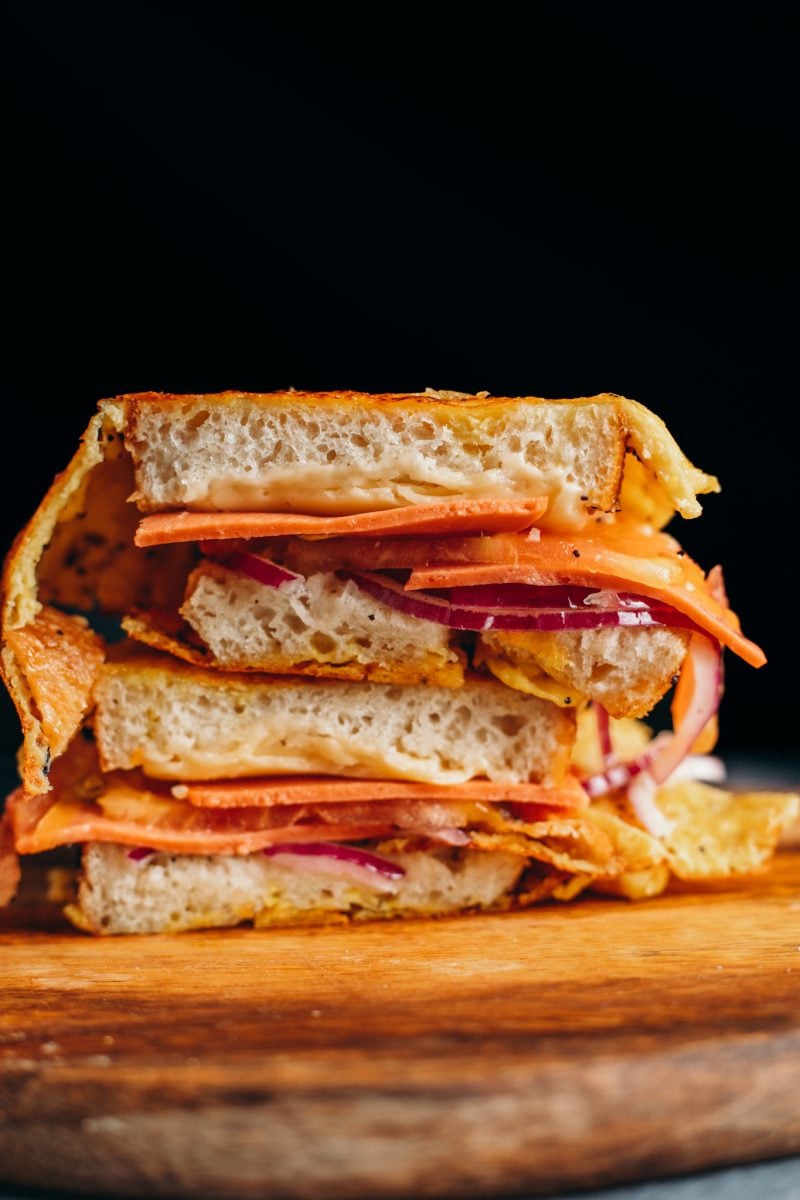 Wait, the egg is on the outside??

You heard that right! Contrary to popular belief, sometimes the inside ingredients of sandwiches can go on the outside! That is definitely the case with this Vegan Inside-Out Bagel Bread Breakfast Sandwich. Vegan egg substitutes have come a long way recently with the creation of Just Egg liquid plant-based egg! And let me tell you – it tastes good no matter which side of the sandwich you put it on! You might be thinking, “what is the point of that? Now you’re just taking something already perfect, and adding an extra step!” Well, let me explain to you why this is actually a more practical way to make a breakfast sandwich.

But first, we need to talk about the second reason this Vegan Inside-Out Bagel Bread Breakfast Sandwich should be at the top of your meal planning list this weekend. That is, my wife’s famous and delicious Everything Bagel Bread! Be sure to get the recipe because it will take any sandwich you make up a notch. 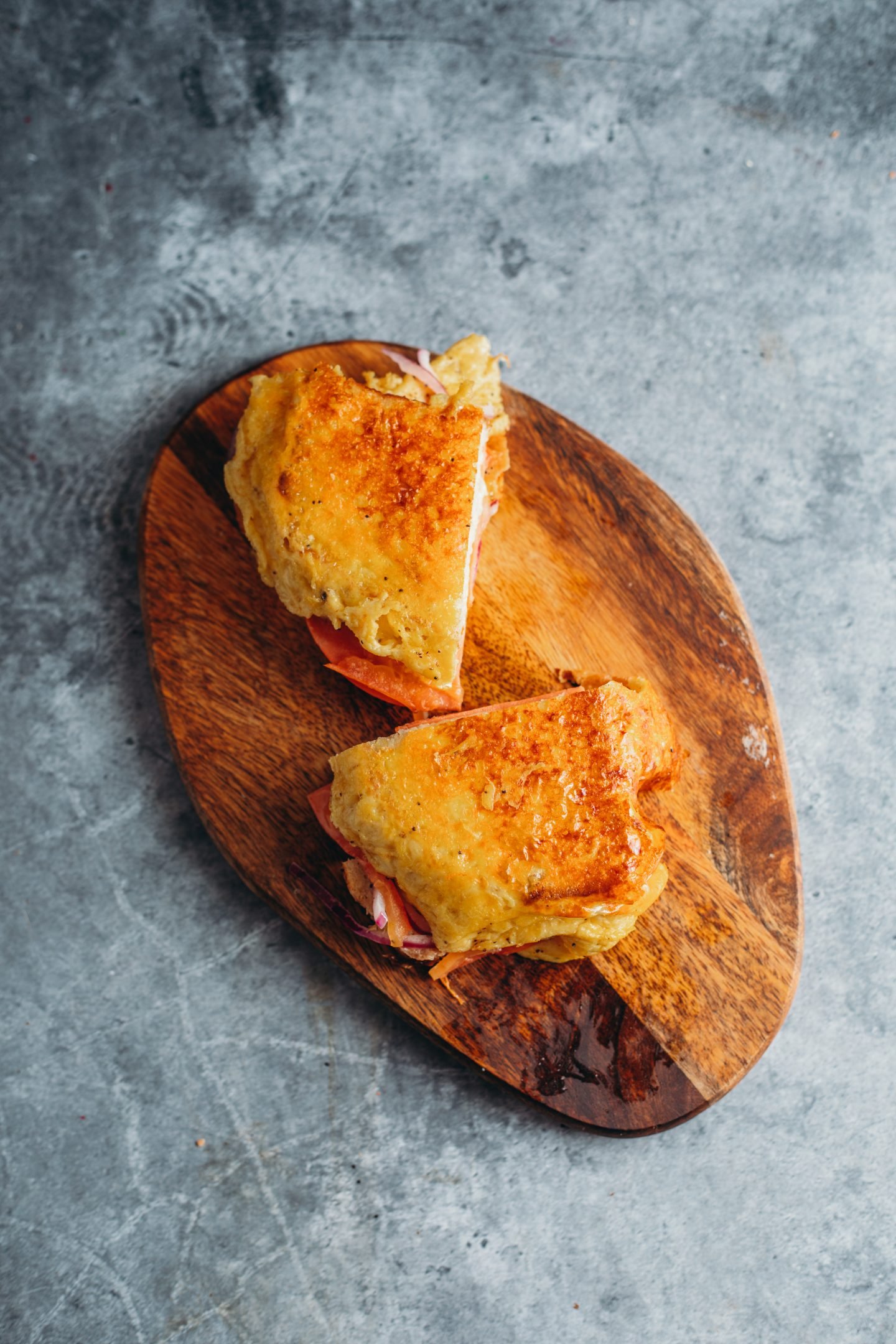 Let’s get into how it’s done:

First of all, I will remind you that this Vegan Inside-Out Bagel Bread Breakfast Sandwich is for practical reasons, despite what you might think! Like any recipe that isn’t toast, a problem arises every time. Dishes. Dishes are any home-cook’s nightmare, and the sacrifice we have to make in order to get feel-good home cooking in the comfort of our own homes. Maybe that’s just the guy in me talking – but I would do just about anything to have less dirty dishes so that I can enjoy the meal I just made even sooner! We all run into the problem of either cooking two things at the same time with multiple dishes, OR cooking one and then the other. But here’s the beautiful thing about this Vegan Inside-Out Bagel Bread Breakfast Sandwich – it’s all done in one pan!

Here’s how it works:

First, after the bread is made – prep your frying pan with a good amount of butter. The last thing we want is for the egg to stick and mess up the entire reason we’re putting the egg on the outside in the first place!

Next we add the plant-based Just Egg into the pan. But here’s the trick, instead of scrambling, or folding over to make an omelette that can fit in a sandwich – we actually lay the pieces of bread on top of the egg! It seems counter-intuitive, but trust the process and it will all be worth it in the end! 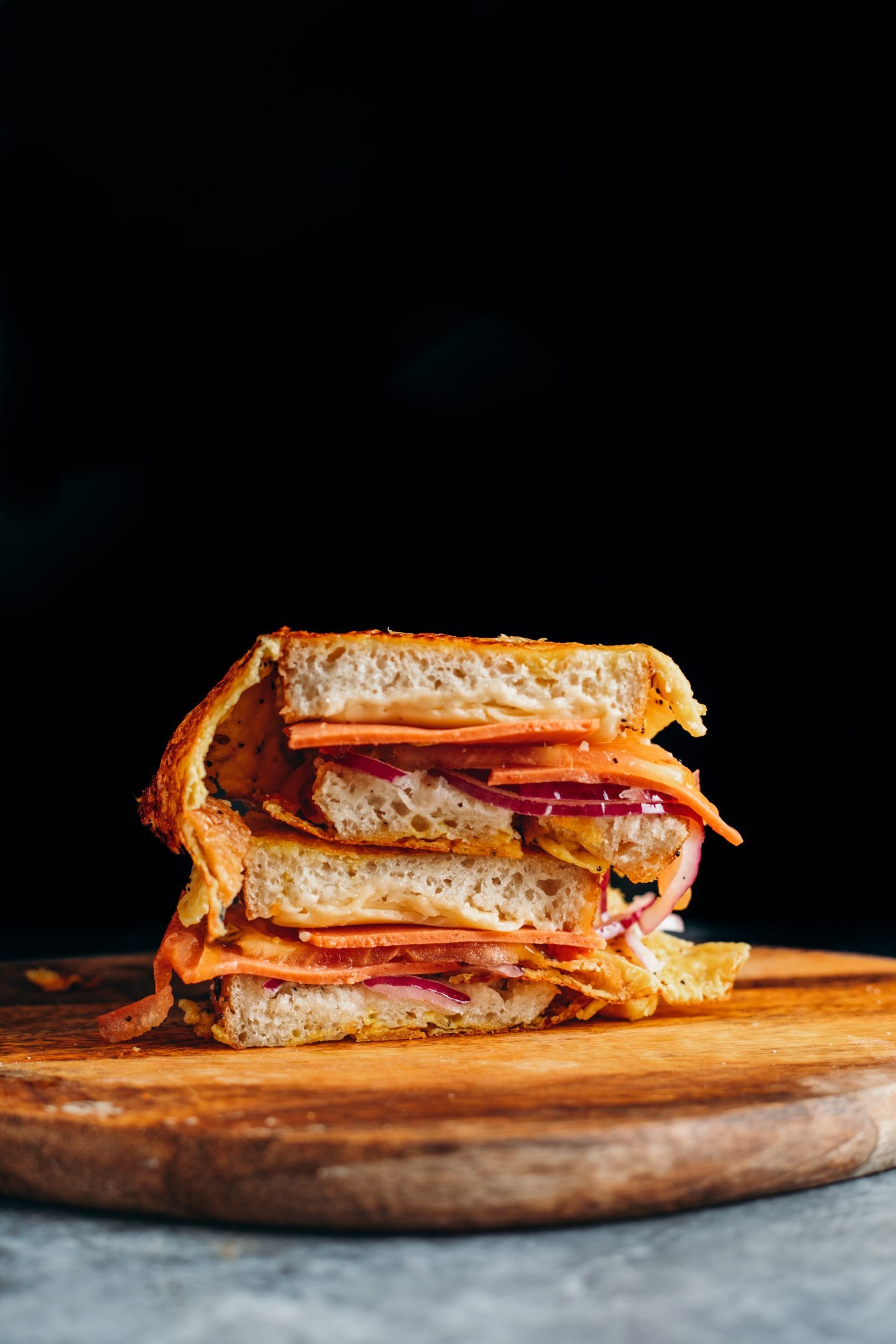 Now comes the fun part! Load up one of the pieces of bread with your favourite breakfast sandwich products. I’ve always been a fan of vegan cheese and ham, with something aromatic like garlic or red onion and tomato. But feel free to switch it up and make it your own!

After letting the vegan egg firm up, it’s time to flip it when the bottom is a perfectly crispy golden brown. Fold in the sides over the bread, and then close over the sandwich by folding the plain piece of bread overtop of the one with toppings. If you put vegan cheese on it, put a lid on for a minute or two to let it melt. Just like that, you have a perfectly cheesy and crispy inside out breakfast sandwich – all done in one pan!

Serve it up, and enjoy your Vegan Inside-Out Bagel Bread Breakfast Sandwich!

This Vegan Inside-Out Bagel Bread Breakfast Sandwich is loaded with vegan ham, and vegan cheese! What’s even better, the egg is on the outside!