You KNOW I had to do it! for those of you following along for some time now, you know that there is a bit of a trend forming with the type of recipes I’ve been putting out. If there is a way to use Vegan Big Mac Sauce, you know I will… Combine that with the basic idea I had for my Pizza Bombs Recipe, and you have a masterpiece! 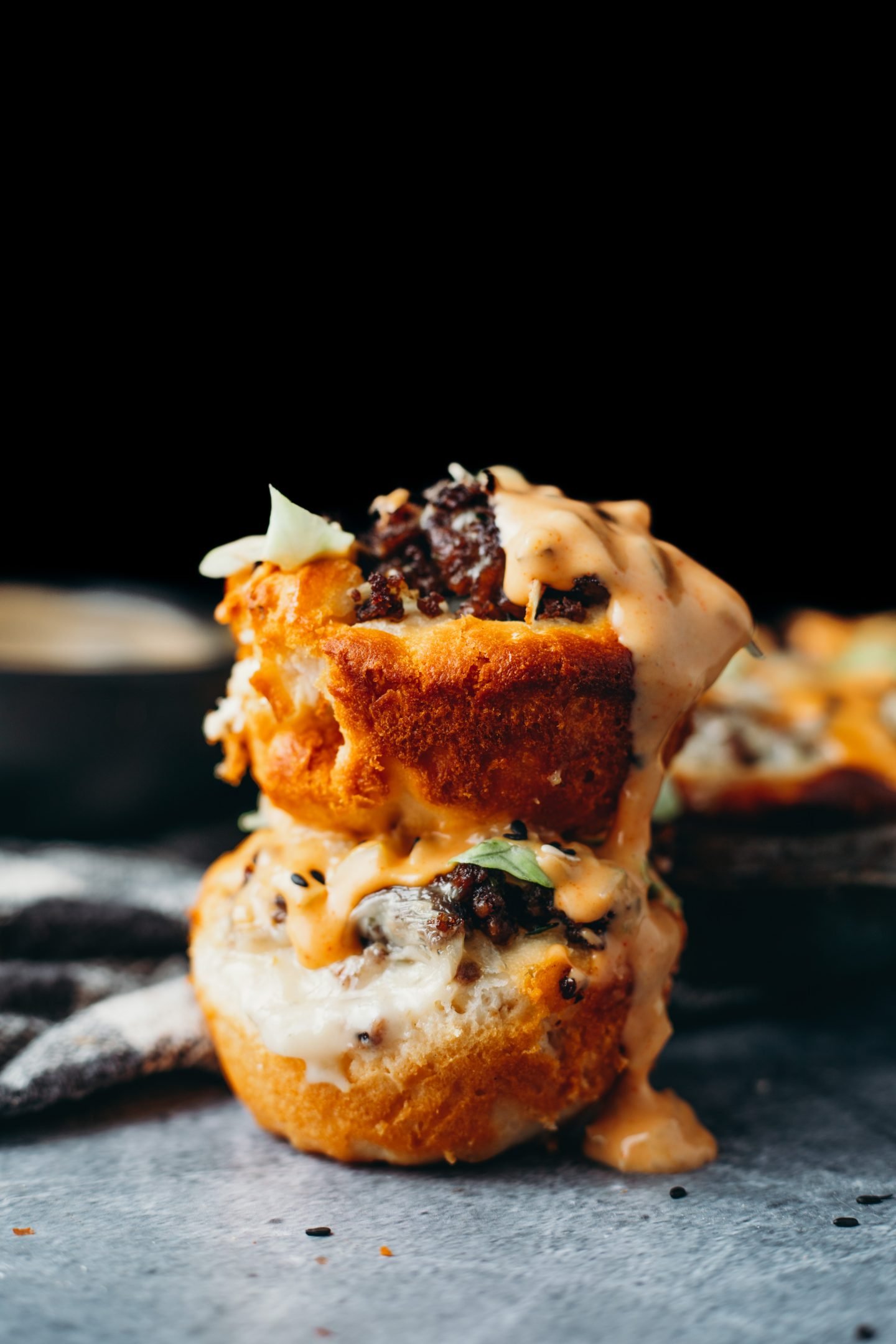 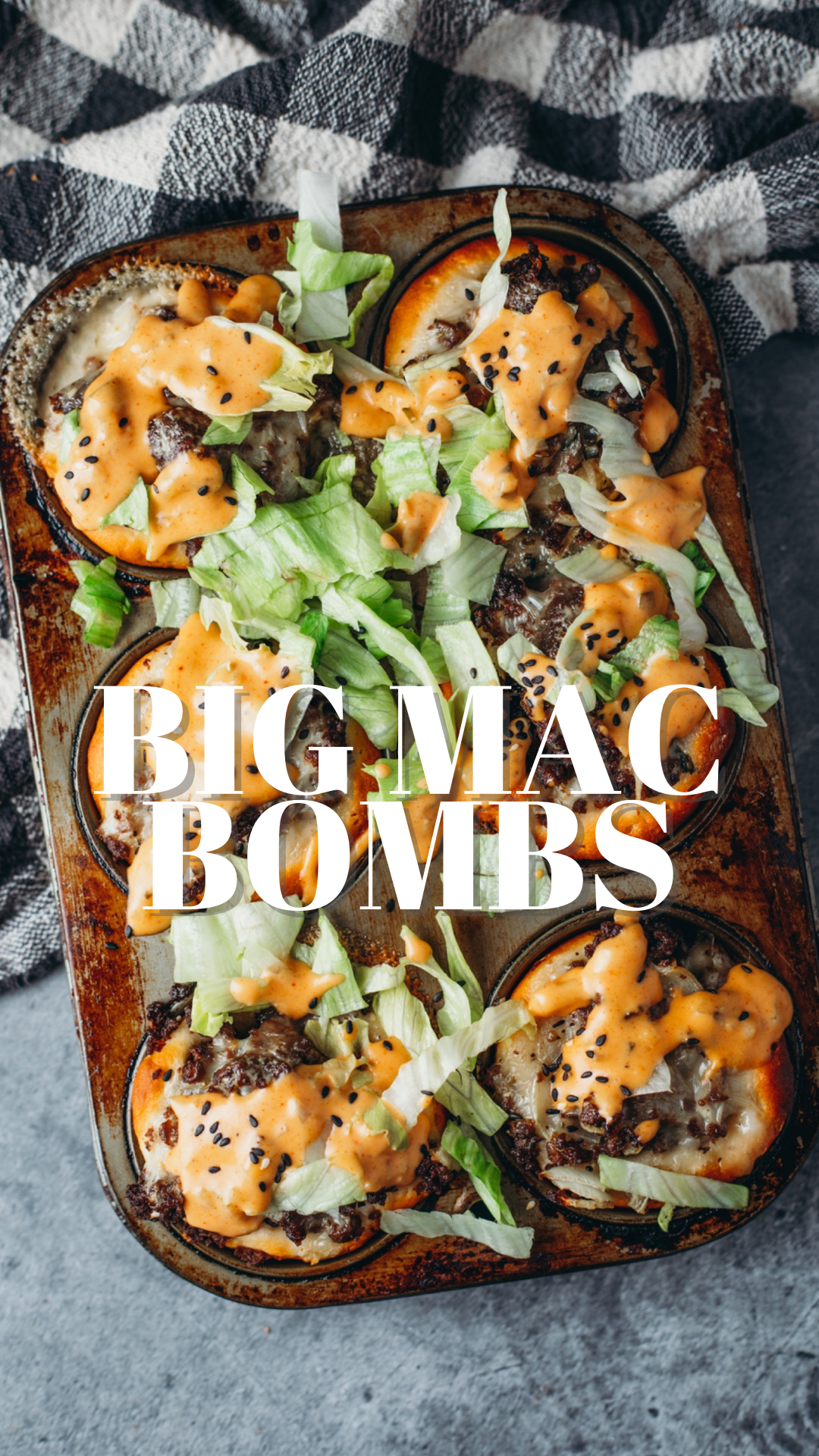 Are they really that easy?

Let me put it this way – If you have 15 extra minutes today, try these Vegan Big Mac Bombs out! The best part about these is that you most likely have most of the ingredients on hand. And the few that you might not have are super easy to find at any grocery store in a pinch. These Vegan Big Mac Bombs are made using the Pillsbury Biscuits which happen to be accidentally vegan. On top of that, all you need to do is fry up your favourite vegan beef with some onion, chop some lettuce finely, and top it with the quickest at-home Big Mac sauce!

You might be asking, does the Big Mac Sauce really taste that similar to the real thing? Well… Anyone who has made my famous Vegan Big Mac Toast, or bought my Gourmet Sandwiches Ebook for the Big Mac wrap recipe know that this Big Mac Sauce is no joke! The Homemade Big Mac Sauce tastes just like how I remember. And say what you will about McDonalds, but you have to admit their famous Big Mac sauce is sure to be an iconic side dish for many years to come! 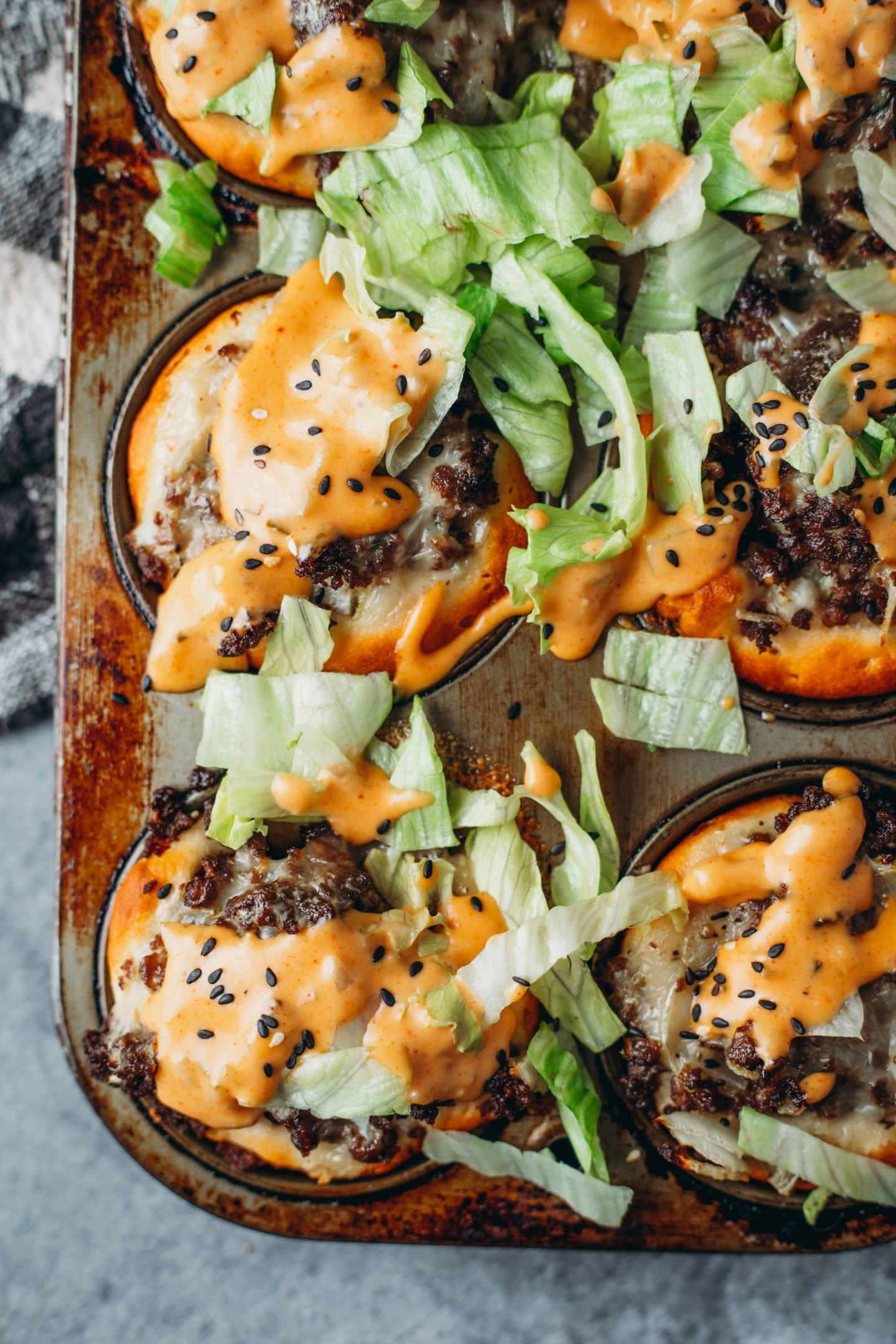 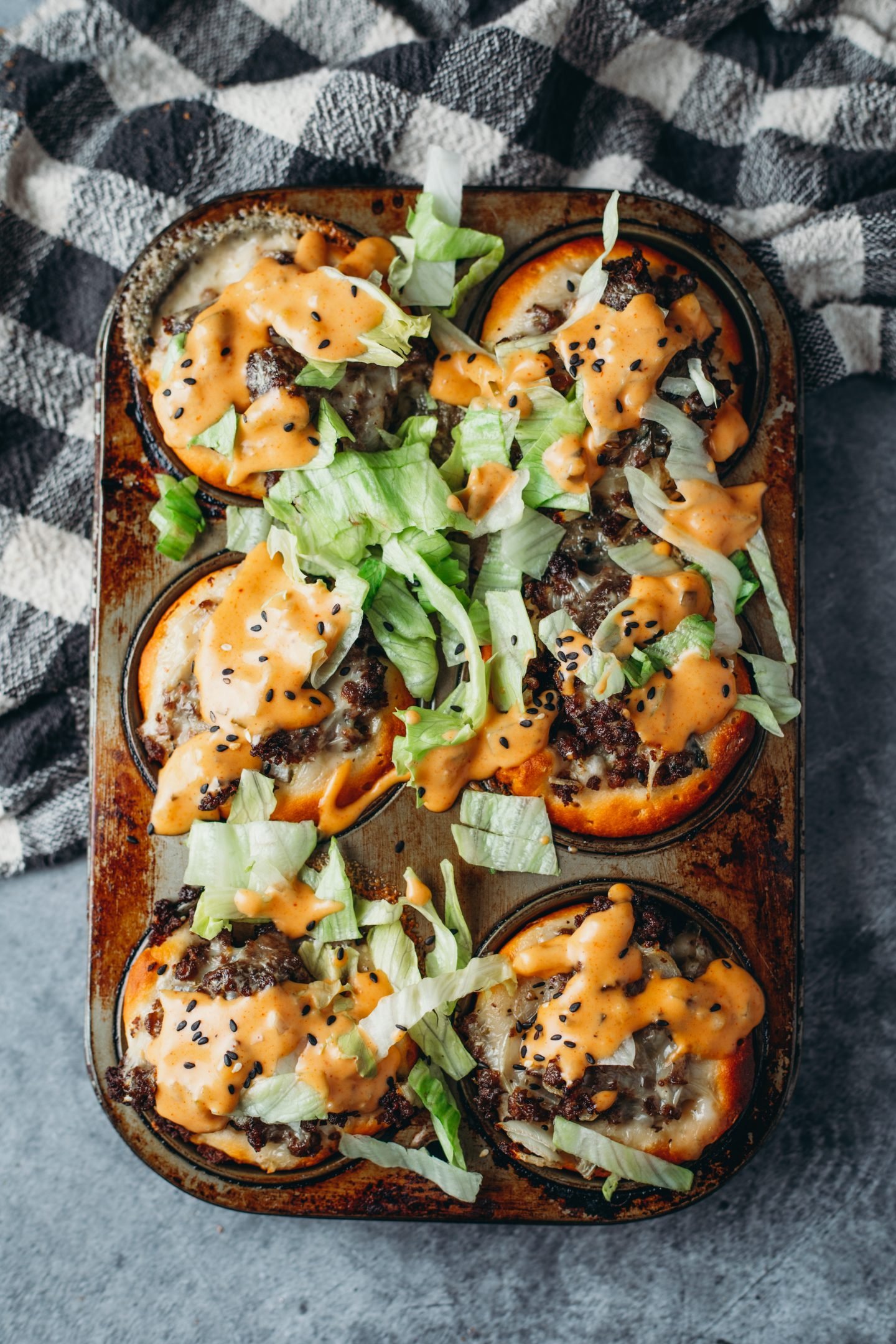 How are they made?

The short answer is, quickly and easily! But the slightly longer answer is:

… first, choose your favourite vegan beef crumble! This is key to these Vegan Big Mac Bombs because it will change the taste drastically. The beauty of plant-based food this day and age is that there is SO MUCH option. Which means – you have plenty of flavour option to suit your needs. That said, the vegan beef crumble isn’t the entire flavour profile. That honour goes to the highly popular vegan Big Mac Sauce!

… Vegan Big Mac sauce is iconic for its history as well as its rich and tangy taste. Luckily, now that vegan mayo is a thing, you no longer have to go without! Try making this Vegan Big Mac Sauce for yourself and you might never stop.

… Lastly, chop up some lettuce and buy yourself a pack of the Pillsbury Biscuits that are happily, accidentally VEGAN! All you have to do is place them in a muffin tray, heat the ingredients and pile them all on top before baking them into these perfect Vegan Big Mac Bombs! 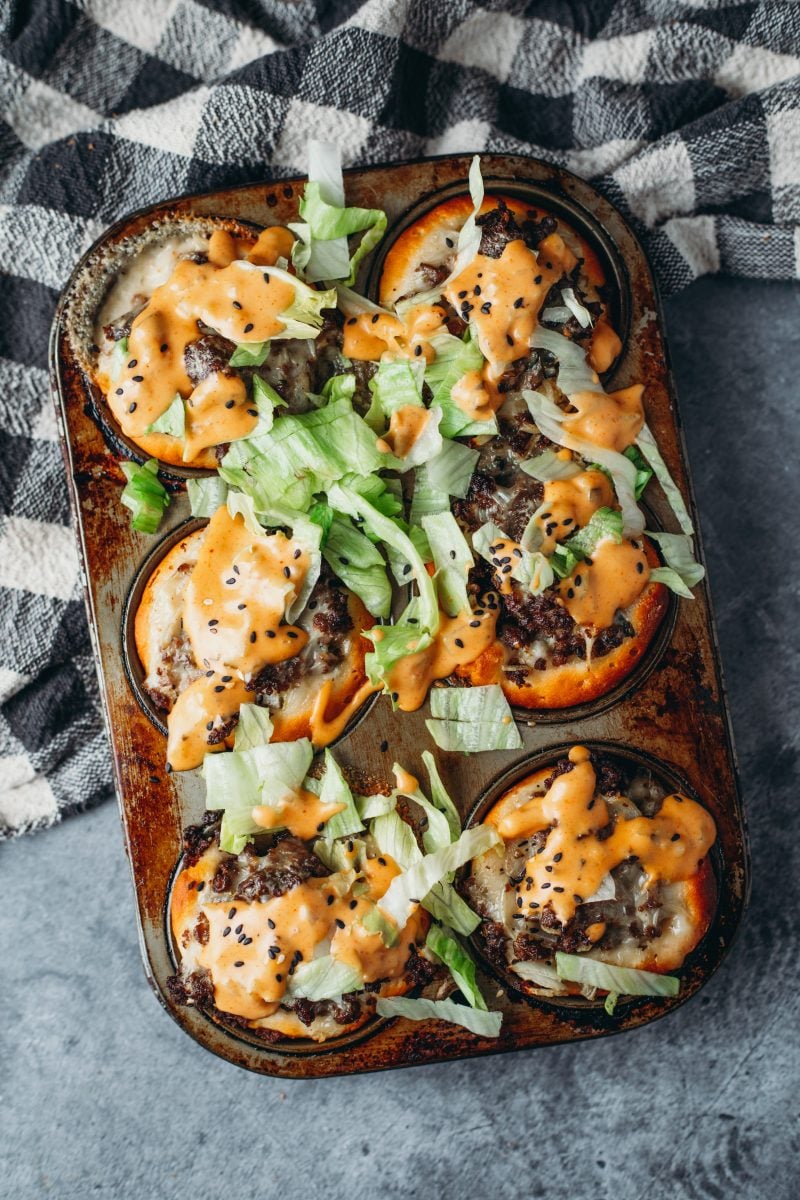 If you like the looks of this Vegan Big Mac Bombs recipe and give it a try, be sure to comment and leave a review below – and share to us on instagram @gregsvegangourmet and @itslivb!

For the Pizza Bombs