This Spooky Fall Morning Crisp Is the PERFECT way to start your October meal plans and morning recipes. It is  so easy to make and prepared in 15 minutes using the air fryer! If you’re looking to use those extra apples bound to be hanging around the house this time of year, this is the way to do it! Not only is it good in the mornings, but add a bit of ice cream on top and you have the best vegan dessert for after dinner.

Made using the in-season apples found at your local markets and superstores, this Spooky Vegan Morning Apple Crisp is loaded with apple crumble topping and even topped with vegan ice cream for those after dinner cravings! 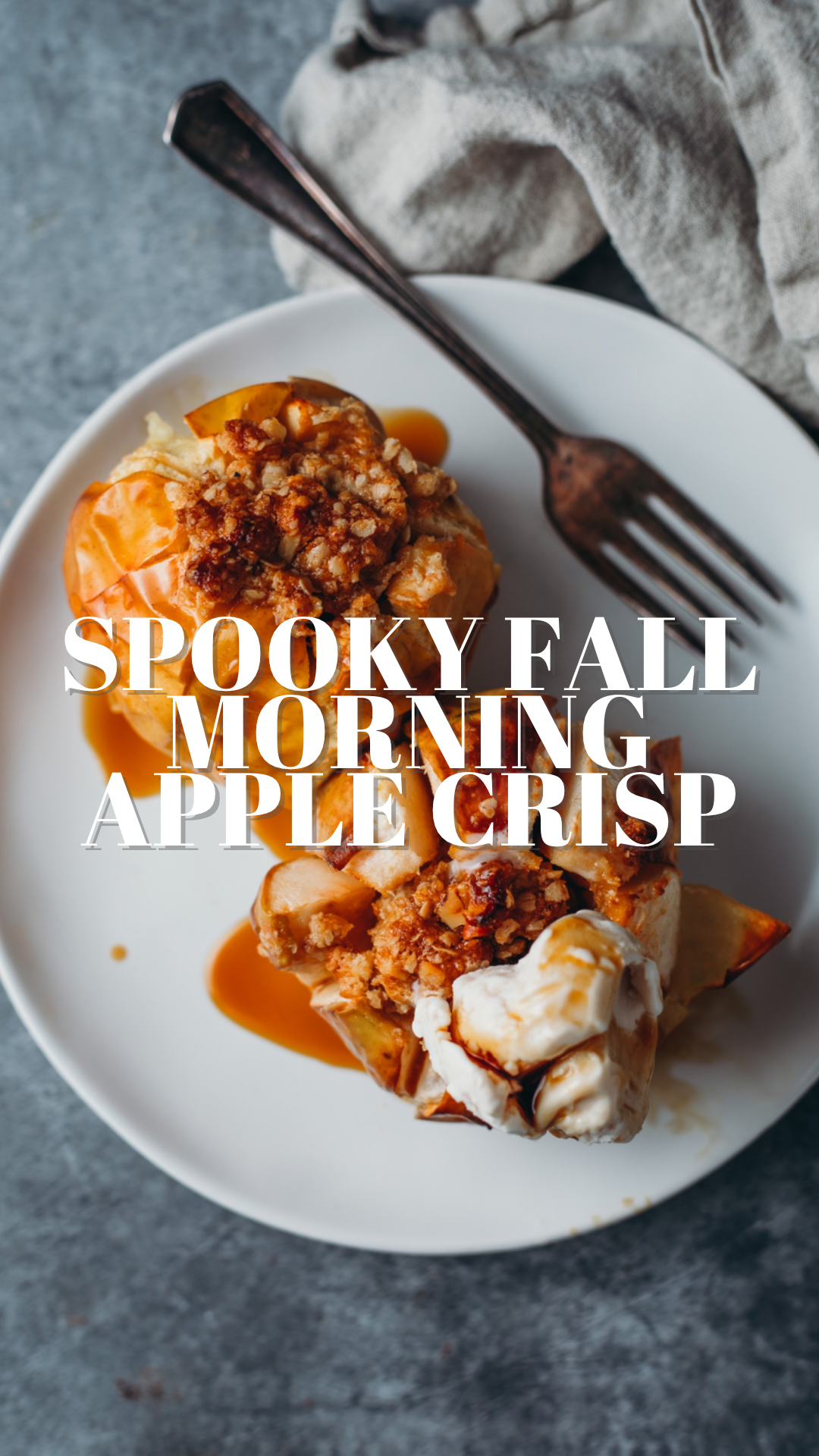 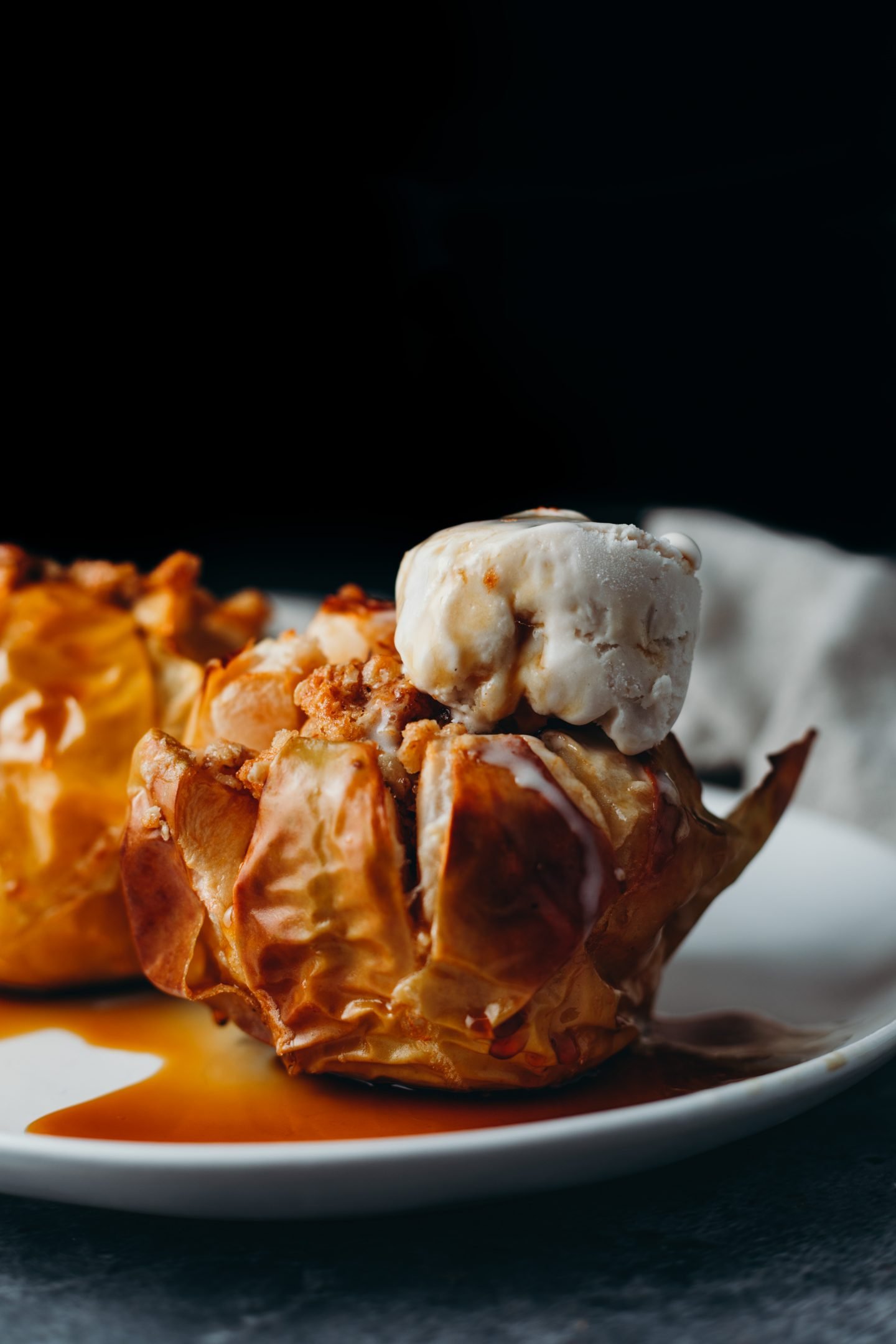 That’s the great thing about this Spooky Vegan Morning Apple Crisp, it can be both! Sometimes the line between breakfast and dessert can be a bit blurred. I’m not always a huge fan of sweet breakfasts first thing in the morning, but from time-to-time it can be a great treat. At first glance, dessert for breakfast is a bit weird. But I remember a time when I was in University that I had a smoothie every single morning that consisted of berries, banana, oats, maple syrup and almond butter. Not to mention the period of my life when I ate three bowls cinnamon toast crunch regularly every morning. When you think of breakfast in those terms, an apple crumble topping and a bit of maple syrup isn’t Such a weird thing!

That said, I wouldn’t normally recommend putting a dollop of ice cream on your Spooky Vegan Morning Apple Crisp every morning before work. Don’t get me wrong, I’m not judging! But the sugar crash mid-morning might beg to differ. The great thing about this recipe is that you can add any kind of ice cream to it, and just like that you have the best and easiest after-dinner dessert.

If you like the looks of this Spooky Vegan Morning Apple Crisp. then give this Classic Vegan Apple Crumble pie or this Garlic and Rosemary Apple Grilled Cheese a try. 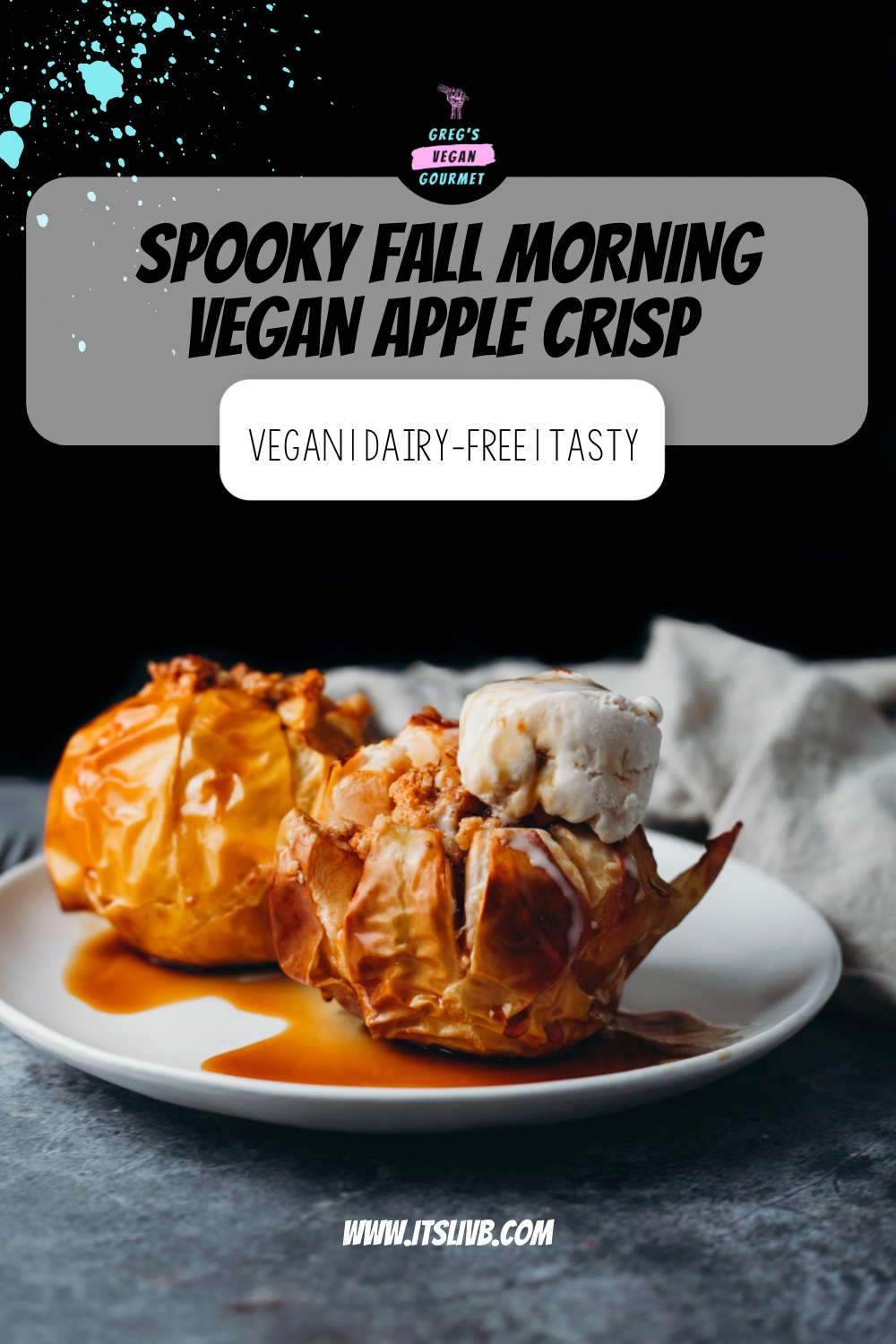 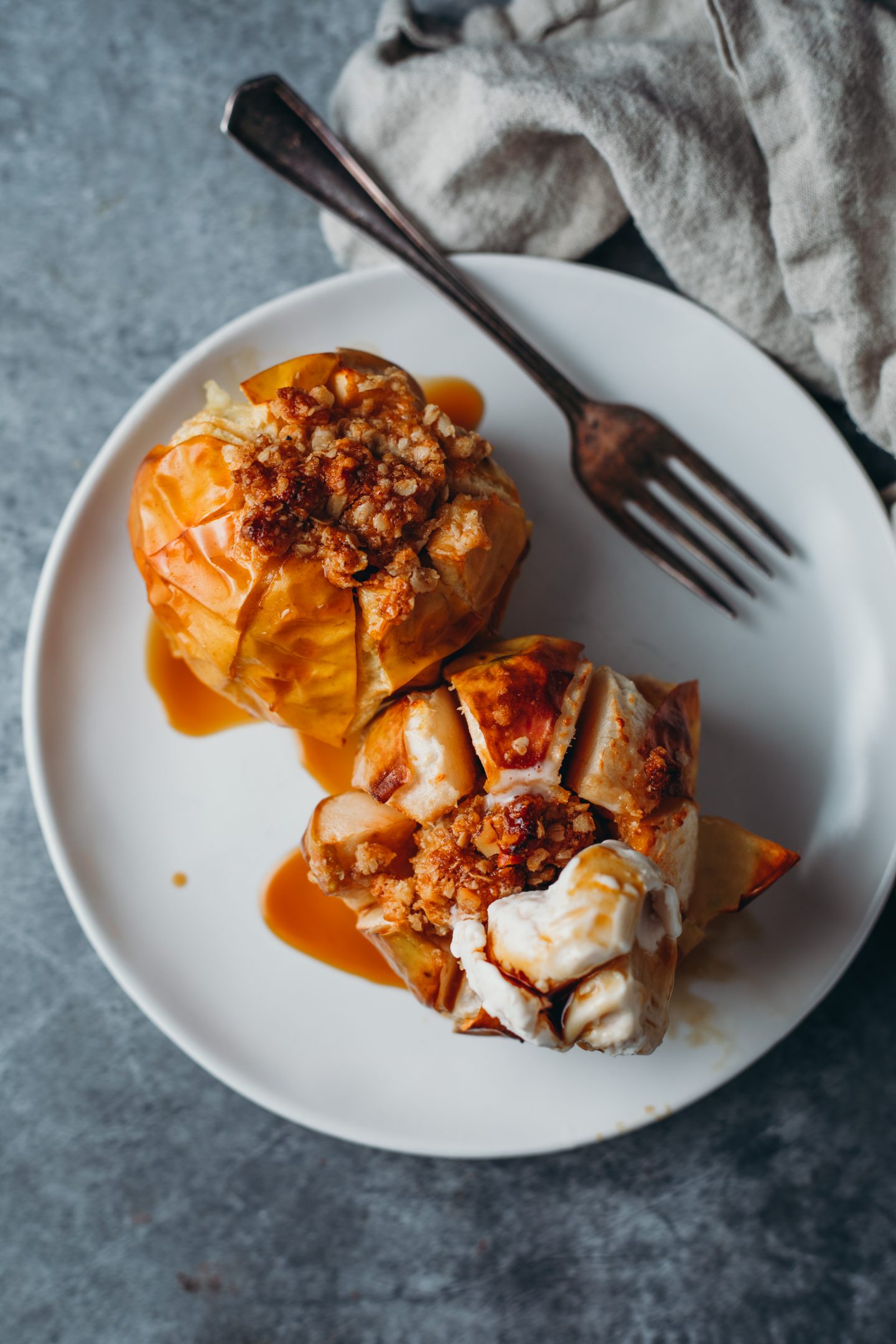 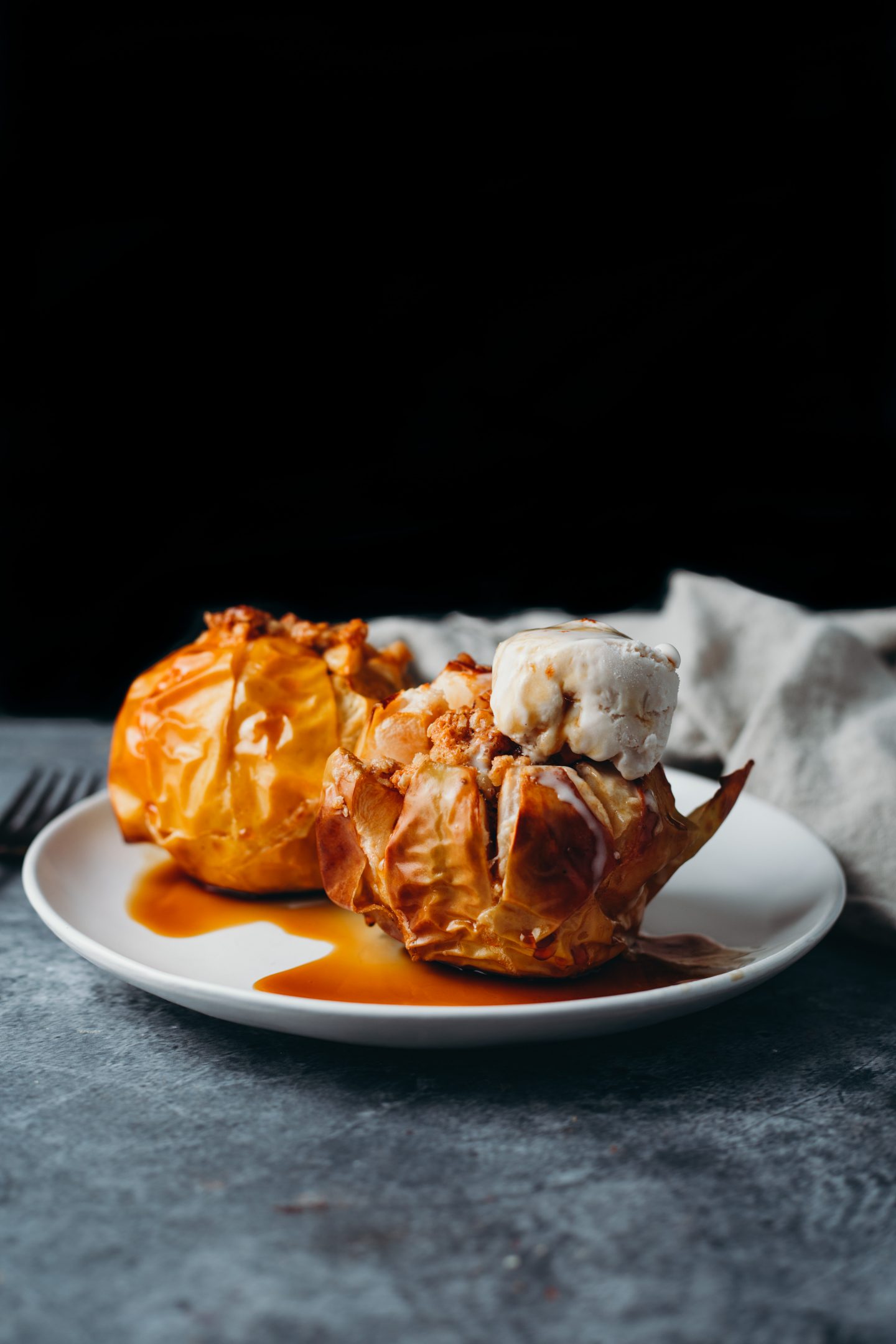 How do you make it?

Let me start this with a disclaimer. If you have an air fryer, then this recipe just got a whole lot easier! That’s not to say that this Spooky Vegan Morning Apple Crisp is difficult to make without one, but it wall save you an easy 10-15 minutes in the kitchen every time you want to make this morning or after dinner dessert. I used one, and was thrilled with how it turned out. The apple skin turns perfectly brown and crispy while the inside stays soft and easy to eat. If you do try the alternate instruction to heat in the oven, let me know in the comments how you liked it!

… First you want to get yourself an apple corer. Preferably, one of the ones that slices out the individual pieces for you on its way down the apple. The trick to an even baking is to push it nearly halfway down the apple. That way, the apple is cut into small fingers and it is easier to hollow out the apple without falling apart.

… Next you want to take a small rounded teaspoon spoon or equivalent to hollow out the apple. It doesn’t need to be scraped out too much, just enough to get out the seeds and allow enough room for the crumble filling.

… Lastly all you need to do is combine the quick and easy filling and stuff the apple before baking in the air fryer or oven. This Spooky Vegan Morning Apple Crisp is as easy as that! 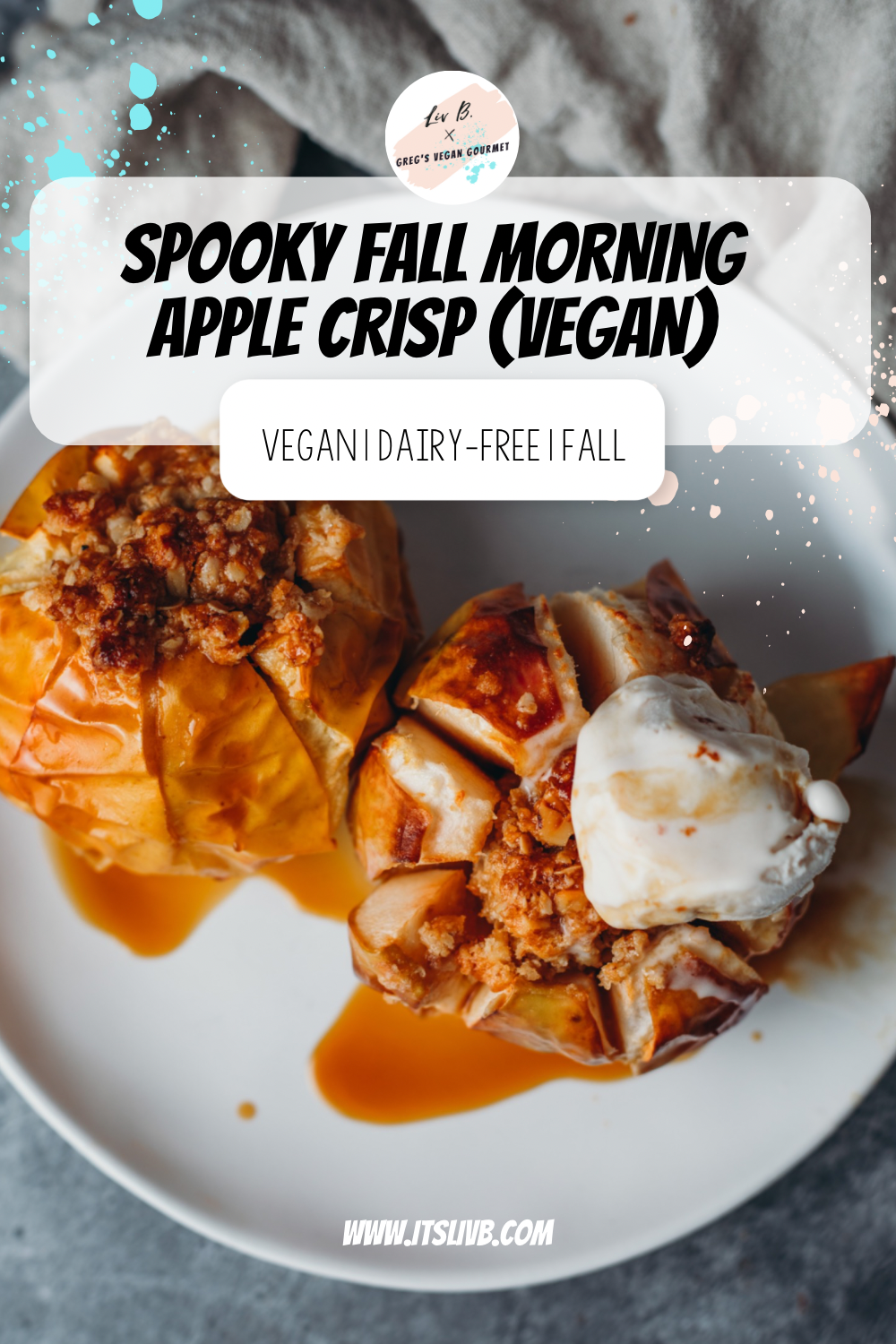 Lastly, remember to let us know how you liked this Spooky Vegan Morning Apple Crisp by leaving a comment and review below. And don’t forget to follow @gregsvegangourmet and @itslivb for daily vegan comfort food Inspo and to share your food creations with us!

Made using the in-season apples found at your local markets and grocery stores, this Spooky Vegan Morning Apple Crisp is loaded with apple crumble topping and even topped with vegan ice cream for those after dinner cravings!