Being Vegan on a Cruise

Hi everyone! I am back from my cruise on Royal Caribbean’s Allure of the Seas. The ship went to Cozumel Mexico, Falmouth Jamaica and Labadee Haiti. Everywhere was so beautiful and I wasn’t surprised at all that we had a great time. One thing that did surprise me though, was how easy it was to be vegan on the cruise! I know it will be different for every cruise line but hopefully I will be able to share some basic tips as well as specifics from my cruise that will help you.

Disclaimer: I did not include photos here because TRUST ME you would not want to see them! I tried to take some photos but they were all in bad lighting on an iPhone. So, to avoid the embarrassment I decided to leave the photos out. However, I am sure you can use your imagination! 🙂

1. Inform them before you go! About a month before the cruise I sent an email to the customer help and specified my cabin number, name, and dietary restrictions (vegan and peanut allergy). They made a note on my file but also told me some helpful tips. You are allowed to bring non-perishable food items with you to keep in your cabin. I brought granola bars and a box of cereal, as well as small juice box-size cartons of almond milk. I ended up only eating the granola bars on the flights and never touched the other things. This is because there was almond milk available in all the dining rooms as well as a huge selection of cereal.

2. ASK. There are usually signs above the food in the buffet dining room outlining what the food is, and they sometimes say “vegetarian” or “contains nuts/pork/shellfish/other allergens”. But I found these signs to be inaccurate at times. For example, the “Arrabbiata Sauce” sign did not say contains pork, but when I asked if it had meat in it they told me it did contain pork. So, I always remembered to ask before I ate a new dish. They were extremely helpful and 9 times out of 10 brought out the chef to tell me himself if it was or was not vegan.

3. Tell them what you want to eat. In one of the main dining rooms (called the American Icon Grill) they have a menu that changes nightly. The menu always had a vegetarian option but not always vegan. We spoke with the head waiter about vegan options and he ended up asking us what we like to eat. We started listing off foods (stir fry, curry, steamed veggies, rice) and he noted them all. The next night, we didn’t even have to order, he just brought us all of the food we had asked for the night before! We weren’t expecting it at all but it was such a nice thing for them to do. The food was incredible and the best part was, it was all of our favourite foods!

Now I will list off where we ate and what we ate to give you an idea of what they had.

BREAKFAST: We always ate at the “Windjammer Cafe” which is a huge dining room that is all buffet. During breakfast there was:
– cereal and almond milk (ask at the coffee counter for almond milk)
– hash browns (deep fried and SO GOOD)
– bagels, toast, buns, jam, peanut butter, etc
– veggies like cucumber, carrots, grilled tomatoes
– fruit (melon and pineapple. ALWAYS melon and pineapple haha)
– oatmeal made with water. topped with strawberry syrup (originally for the waffles but I used it for oatmeal instead), nuts, seeds, brown sugar, dried fruit etc.
– rice and stir fried vegetables
– There is also the “Vitality Spa Cafe” that makes vegan smoothies, but they cost about $9

LUNCH: For lunch we also went to the same buffet, unless we were off the boat. One time we ate at the “Parks Cafe”. For lunch there was:
– rice (always plain white, sometimes veggie stir fry rice without egg)
– dal (curry lentil or yellow pea indian dish. SO GOOD. THEY MAKE THE BEST DAL!!!)
– pasta (plain noodles with plain tomato sauce)
– salad bar with all the greens, veggies, tofu, dried fruit, nuts and seeds you could want
– veggie burgers (soy-based)
– fries
– steamed veggies if you ask for them
– at the Parks Cafe they have vegan grilled vegetable and garlic pitas. They are served cold and taste amazing! There is also a pizza place where you have the option to make your own vegan pizza. We never tried it though so I can’t tell you if it was good or not!

DINNER: For dinner we switched between the American Icon Grill (sit down and order restaurant), the buffet, and once we went to the sushi restaurant Izumi. What we ate:
– pasta with tomato sauce (extra delicious at the American Icon Grill)
– steamed veggies like carrots, broccoli, asparagus
– rice and curry (SO GOOD)
– tortillas with soy-based chilli
– fruit/ melon soup and salads to start
– all the same foods from the lunch buffet were available at dinner
– vegetarian sushi and tofu salad at the sushi restaurant
– homemade melon sorbet for dessert and one time they had an almond chocolate brownie/cake/square thing. Super delicious

DESSERTS/SWEETS:
The one downside I will mention is that we rarely got to eat sweets. There were SO MUCH cookies, ice-cream, cake, cupcakes, cheesecake, etc on the ship but none were vegan. We could have maybe asked to have something specially made but in all honesty it was probably good that we didn’t. There was so much food available we never went hungry and dessert would have just been extra food we really didn’t need :). 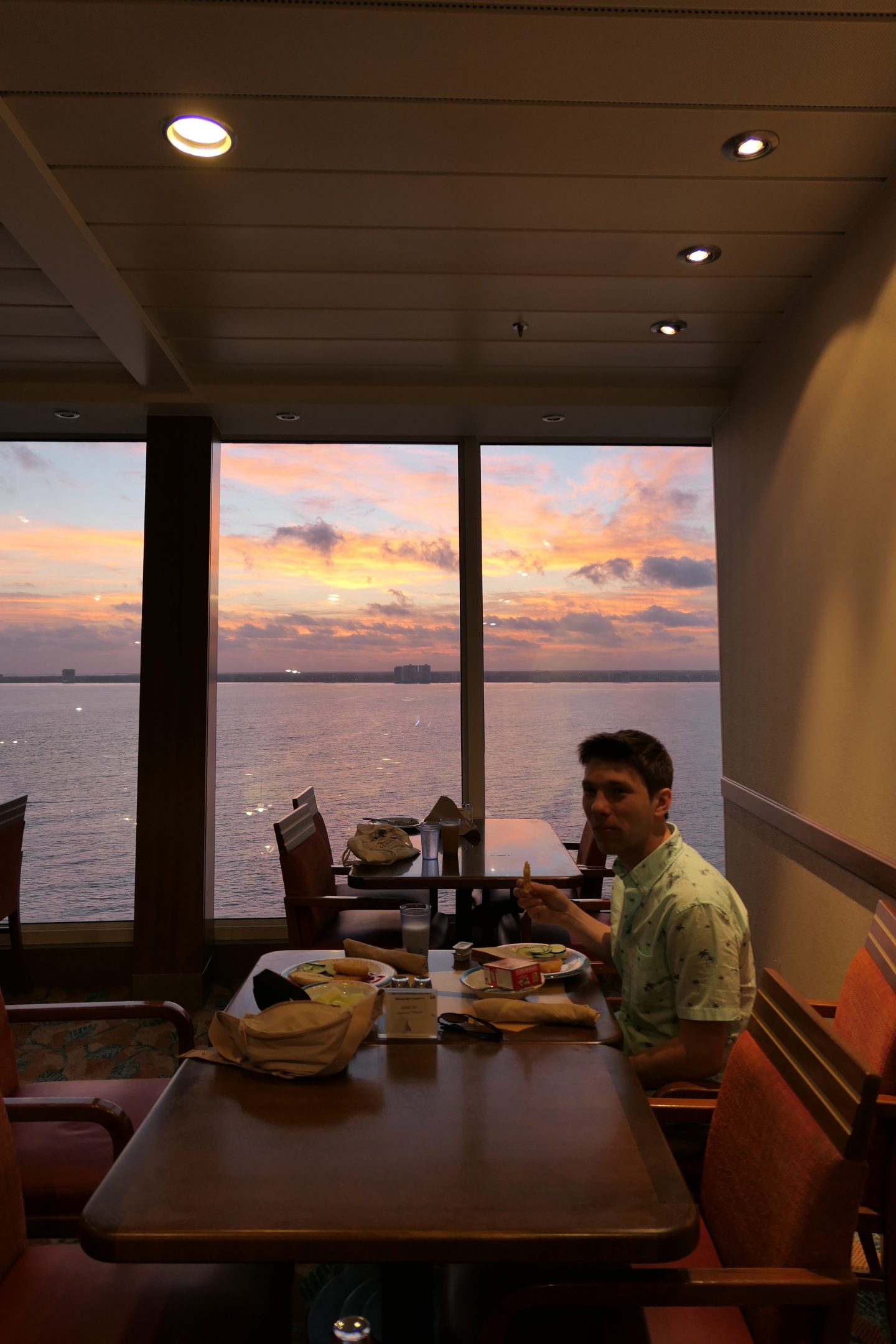